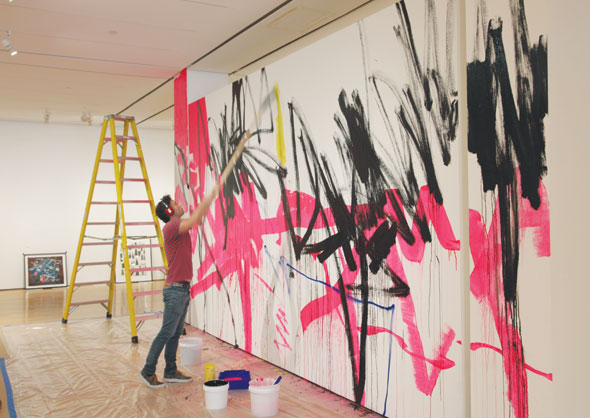 Alex Brewer, the artist better known by his tag HENSE, had a breakout year. But he’s certainly no breakout artist, having long straddled the worlds of illicit street graffiti and commissioned public art.

Even so, 2013 brought new milestones for the thirty-five-year-old Brewer, both for his art—abstract works of bold lines and candy-colored shapes—and acclaim. Among the highlights: a solo show of paintings at a Chicago gallery, corporate commissions from New Jersey to Florida, contracts from local big names like Fay Gold and Alton Brown, and a soaring exterior installation in Lima, Peru. Brewer also produced his longest work to date, a 16-by-300-foot mural for a property in Chicago’s warehouse district. (His vertical record is the Peru mural at 137 feet tall.)

And for the first time, Brewer was commissioned by the High Museum of Art to produce a site-specific installation, part of this summer’s Drawing Inside the Perimeter exhibition (above). “It meant a lot to be included in an exhibition at the museum I’ve gone to for years as a source for contemporary art as well as art history,” Brewer says. “It was an absolute honor.”

But even as Brewer winds down from what he describes as his “most productive year,” his focus is on what’s ahead. The top goal for 2014? A solo exhibition at a major museum.

The programming staff at the High Museum of Art demonstrated that you can stage a blockbuster in a highbrow setting just as well as at a multiplex. Of course, it helps when you build an exhibition around a masterpiece with its own celebrity factor. Vermeer’s Girl with a Pearl Earring starred in a crowd-attracting display of Dutch masterworks this summer. (The accompanying transform-your-selfie-into-a-Vermeer interactive feature was charming too.) The High continues to leverage partnerships with two big current shows: The Art of the Louvre’s Tuileries Garden, and Go West!, which draws from the Buffalo Bill Center of the West in Cody, Wyoming.

In the scrappier strata of the arts world, the Goat Farm complex is expanding with a Castleberry Hill satellite, Erikson Clock. The extension serves as home base for the exciting enterprise MASS Collective, whose members aim to merge science and art, and the new exhibit space Nelson Street Gallery.

This article originally appeared in the December 2013 issue under the headline “Tag, You’re It”