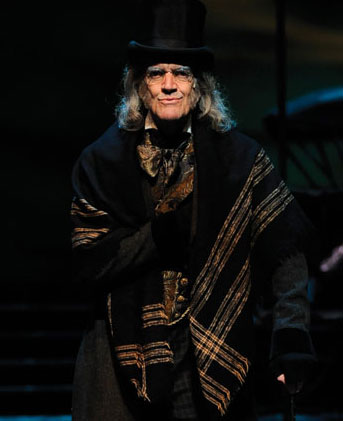 Why retire now? The past two years of A Christmas Carol have been so good; I want to bow out gracefully. I don’t want to have a bad year. I don’t want to trickle out. I’m not at all retiring from the theater, just from the role of Scrooge.

Is it true that your original career goal was to be a singer-guitarist at Steak & Ale? At the time, I was a tennis pro at the Atlanta Athletic Club. I dreamed of a life in the arts. I played guitar and sang. I thought singing in a Steak & Ale lounge could be art.

What advice do you have for the actor who will take on this role next? Respect the play and make sure you’re not lapsing into doing a pageant. It’s worthy of your best effort, every single time. Always remember that every night is opening night for the audience.

What has Scrooge taught you? The big lesson, of course, is about vulnerability. Terrible things happened to this man in his youth. His mother dies, he has this cruel father, and the love of his life leaves him. He vows not to be hurt again. He does that by removal. If you never love, you’ll never get hurt. It takes the ghosts to teach him otherwise. Scrooge’s story is about redemption and realizing it’s never too late to change.