In Savannah, SCAD has staked out a one-time flour factory, a revamped theater, and an 1890s armory. Although it’s been in Atlanta for less than a decade, the university’s on a similar campaign to repurpose structures here. The latest is the former 14th Street Playhouse, now dubbed SCADShow and reconfigured to host film screenings (catch the 1960 Godard classic Breathless next month) and special events (like February’s aTVfest seminar on media innovation). 173 14th Street, scadshow.com 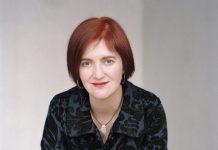 Room author Emma Donoghue on her latest novel, The Wonder