Home Civil Rights Does SCOTUS have any business reviewing the Voting Rights Act? 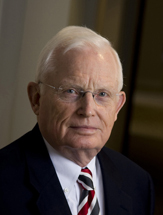 Doubtless, you’ve heard much about the favorable reception conservative members of the U.S. Supreme Court gave on Wednesday to arguments for sparing poor Shelby County, Alabama—and, by extension, most of the Southern states—from the ignominious edicts of Section 5 of the 1965 Voting Rights Act.

To veteran Atlanta litigator Emmet Bondurant, however, the question isn’t whether the rightward-tilting Court is likely to lift the requirement that Georgia, Mississippi, and other states with histories of black voter suppression obtain Justice Department “pre-clearance” for any measures that affect voters. (Hint: Is the pope-emeritus Catholic?) To Bondurant, the real mystery is why the Court has any business reviewing the law at all.

Bondurant has been something of a national expert in voting matters since 1963, when, as a twentysomething Harvard-educated lawyer, he successfully persuaded the Earl Warren-led SCOTUS to throw out Georgia’s infamous county unit system in favor of one-man, one-vote.

Now on the national governing board of Common Cause, Bondurant explains that the 14th Amendment gives Congress the power to enact laws to compel states to observe the constitutional guarantee of equal protection under the law. The Voting Rights Act of 1965 is just such a law, and when Congress renewed the VRA in 2006, it did so after holding hundreds of hours of hearings and gathering thousands of pages of documents showing that the Southern states—along with Alaska, Arizona, and parts of California, Michigan, New Hampshire, South Dakota,and New York—continue to generate the bulk of valid complaints of equal-protection violations.

The question the High Court is considering in Shelby isn’t, therefore, whether Congress overstepped its authority in re-upping Section 5 of the Act—it clearly did not—but whether it, well, goofed. “For the Court to throw out Section 5, it must determine that there was no rational basis for Congress to take this action,” Bondurant explains. In other words, the five conservative Justices would in effect be saying they have a better grasp of the current voting landscape than the politicians themselves.

“If anyone wonders whether we still need Section 5,” Bondurant adds, “they need only look at Georgia’s recent reapportionment, which produced racially polarized state legislative districts.”

The Republicans who oversaw the map-making process in 2011, took pains to draw a number of white Democratic incumbents, such as state representative Stephanie Stuckey Benfield of Decatur, into majority-black districts that already had African American incumbents. The result has been a further “resegregation” of Georgia’s political parties, in Bondurant’s words, with the statehouse divided between a nearly all-white GOP majority and a mostly black Democratic minority. (The apparent Republican aim, Bondurant believes, is to use identity politics to make the Democratic Party less appealing to white voters.)

Bondurant had led a legal challenge against the redistricting effort, but the Justice Department declined to support his effort. He was also involved in the fight against the wave of “Photo ID” laws in Georgia and elsewhere that require voters to show certain government-issued ID at the polls, a tactic widely attacked as another voter-suppression ploy.

So, what will happen if SCOTUS rules that Georgia and other Southern states need not follow Section 5, which Bondurant believes has provided deterrence against even more overt forms of voter disenfranchisement? “It’ll open the door to many abuses and a great deal of litigation,” Bondurant says. And—unlike when Boundurant and others argued voting-rights cases in the 1960s—suppression today is more sophisticated and less easy to demonstrate in court. “Equal protection cases are hard to prove,” he says. “Especially when most white politicians have learned not to use the N-word.”