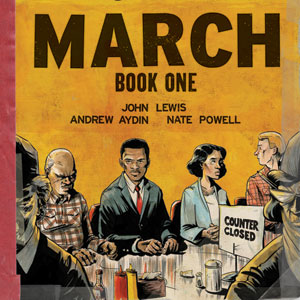 Few would question John Lewis’s place in the pantheon of modern heroes. The civil rights crusader and longtime Georgia congressman is rightly referred to as
an icon. Now his story is immortalized in a new way: Next month Marietta-based Top Shelf Productions releases the first volume of March, a three-part Lewis memoir presented in graphic-novel format.

Lewis’s collaborators started the project with some trepidation. “There was definitely a certain level of anxiety once I realized the scope,” says illustrator Nate Powell. The artist is no pushover, however; his graphic novel Swallow Me Whole earned an Eisner Award, the comic industry’s highest accolade. “One thing that really helped me connect was discovering what a genuine guy John Lewis is,” says Powell. Working on the series has underscored to him the danger Lewis experienced as a Freedom Rider and nonviolent protester. “There’s lots of violence occurring through the story, and sometimes as I’m drawing this sensational action scene I have to remind myself that this is the way things actually happened,” Powell says.

Andrew Aydin, an aide to Lewis and the comic coauthor, says the congressman’s experience as a preacher and politician made him a natural for the form: “John is an amazing storyteller, so when you hear [him] you feel like you’re there.” Powell echoes this, adding that the story “plays out in a very cinematic way,” and few things are better for a graphic novel.