Home Civil Rights Trayvon Martin rally: ‘We must move from stand your ground to common... 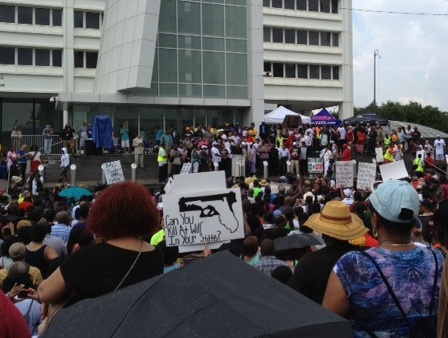 Neither Kathy Sanders nor her son, Rico, had ever attended a political rally before, but they joined thousands of people in downtown Atlanta Saturday afternoon to pay tribute to Trayvon Martin and call for an end to racial profiling.

“Showing this kind of togetherness, maybe we can make a change,” said Kathy, a College Park resident and U.S. Postal Service clerk.

Rico Sanders, home for the summer from Jacksonville State where he’s a senior and a shooting guard on the basketball team, was selling T-shirts; five dollars of each sold would be donated to the Trayvon Martin Foundation, he said.

For Dionna Smith, a U.S. Navy veteran standing several yards away, this also marked a first political rally. Smith, who held a sign stating “I am Trayvon Martin,” said that she’d participated in parades and marches as a veteran, but never marched for a cause like this. Smith said she was “shocked” last week when George Zimmerman was found not guilty in Martin’s death, but added that whatever the trial’s outcome, Zimmerman will “never walk the earth as a free man; the guilt of shooting Trayvon Martin will stay on his conscience.”

Rally attendees chanted, sang along as gospel star Jennifer Holliday belted out “We Shall Overcome,” and listened to speaker after speaker and prayer after prayer—despite the heavy rain that started shortly after the rally began and fell steadily for more almost an hour. The block between the Martin Luther King Jr. Federal Building and Richard B. Russell Federal Center was a sea of umbrellas; those who had worn hoodies out of solidarity with Martin pulled up their hoods as the rain continued.

Martin Luther King III and his sister, Bernice, made a joint appearance as the rally headed into its second hour. Martin III reminded the crowd about the upcoming fiftieth anniversary of his father’s famous “Dream” speech, and its less-famous call for the government to make good on the “bad check” issued to its black citizens. “The check still has not been cashed,” said King’s son, adding that he had just come from an NAACP conference at which there had been discussion of “not consuming certain things, like orange juice, from Florida.”

Bernice King said Martin’s death was a “wake up call” to continue to fight for justice. “In many regards, we have fallen asleep,” she said. “God woke us up just in time.”

Reverend Raphael Warnock, pastor of Ebenezer Baptist Church where the Kings’ father and grandfather both preached, noted the hoodies among the crowd. “What’s so frightening about a black man in a hoodie in the rain?”he asked. On the other hand, he noted, “We have plenty of data to be worried when we see other folk moving through our neighborhood wearing hoods.”