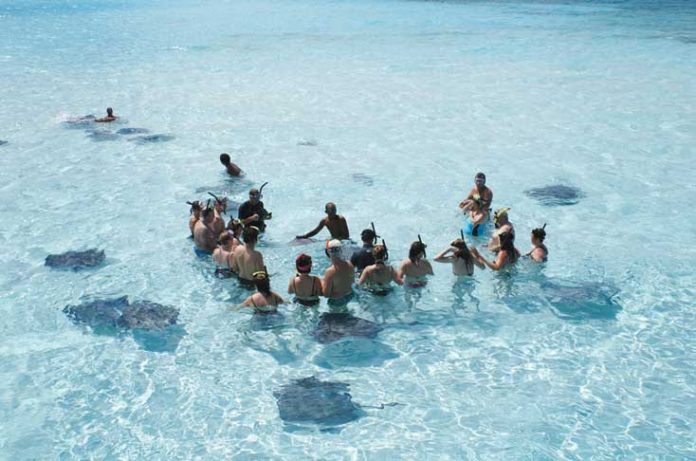 Our forty-five-foot boat was chugging through the North Sound of Grand Cayman, the water an otherworldly turquoise beneath a clearing sky, when we heard a splash off the starboard side. Vernon, our tour guide, had jumped from the top deck. Had he finally gone crazy? It was conceivable. Vernon has the kind of job that seems idyllic in theory—spending hours a day on the sea surrounding a tropical island—but in practice is probably maddening. After all, who wants this view interrupted by chattering tourists?

The driver throttled back and the twenty of us onboard tracked Vernon’s dark silhouette moving over the sea bottom. Much of this area off the northern coast of Grand Cayman, the largest and most populous of the three islands that make up the British territory known as the Cayman Islands, is sandbar and coral reef, so the water is not deep. As the engine idled, Vernon surfaced, holding an enormous shell that he’d evidently spied from his perch. He climbed aboard, split it open, and within minutes we were eating fresh conch meat. Okay, so maybe this really is a dream job.

We were heading back to land after three hours out on the water, the highlight of which had been a half-hour visit to Stingray City. For years, probably starting when fishermen would dump fish guts overboard before heading to port, southern stingrays have flocked to this sandbar, just twenty minutes or so from land. Today tour boats drop anchor here and their passengers jump into the chest-high water, where stingrays glide like shadows just beneath the surface. It’s creepy at first, feeling their rubbery wings on your legs, but soon you’re feeding them squid from your hand and posing for pictures with one draped on your back. “It’s like touching a wet Louis Vuitton bag,” Marc Langevin, the general manager of the Ritz-Carlton, had told us, employing a simile that likely resonates with his clientele. So don’t they sting? Not intentionally. Just don’t jump up and down, since you don’t want to accidentally step on one.

It was an easy excursion, but then virtually everything about the Cayman Islands is easy. As in, easy to get to (from Atlanta, a two-and-a-half-hour direct flight on Delta); easy to navigate (a fifteen-minute drive from the dinky airport to the beach); easy to communicate (English everywhere); and, of course, easy to spend (there’s a Caymanian currency, but it’s pegged to the U.S. dollar, so greenbacks work fine).

Most tourists who aren’t coming by cruise ship (which congregate in the commercial center of George Town) end up in the luxury hotels along Seven Mile Beach, on the western edge of the island. We stayed at the Ritz-Carlton, a labyrinthine, 365-room complex with two pools, ocean-view suites, a spa, tennis courts, and a Greg Norman–designed nine-hole golf course open only to Ritz customers. The concierge gladly arranged our excursions, scouting out options (we chose Captain Marvin’s for our Stingray City trip), while the hotel’s amenities and service were unparalleled. For instance, we realized we should have showered before our massage at the Silver Rain spa, not after, as the therapist was expertly kneading La Prairie Skin Caviar ($200 for 1.7 ounces) into our muscles.

During our visit, the Ritz’s signature restaurants were just completing redesigns, overseen by Atlanta’s own Bill Johnson of the Johnson Studio. Thus we were unable to dine at what I’d heard was the best restaurant on the island, Blue by Eric Ripert. No worries, though; Grand Cayman has earned its reputation as home to the best food in the Caribbean, especially in the past five years with the addition of Camana Bay, a 500-acre planned community funded by Ken Dart, whose family are longtime Cayman property owners and the world’s largest manufacturers of foam cups. Designed by the same firm that laid out Seaside, Florida, the place is touted by its developers as a model of new urbanism, and while it may not have the organic feel of much of the rest of the island, Camana Bay offers some of the best dining and shopping on Grand Cayman. We had dinner at Michael’s Genuine Food & Drink, where the highlights included lionfish chowder (made with an invasive species the chef occasionally catches himself) and breadfruit salad.

Other meals took us to Casanova, a legendary Italian spot in George Town with a porch offering a sunset view; the Sunshine Grill, where the fish tacos and tableside escabèche sauce kept us coming back; and the Calypso Grill, overlooking the North Sound. In the Cayman Islands, water is rarely out of sight, and never out of mind.

Photograph courtesy of Cayman Island Department of Tourism. This article originally appeared in our January 2013 issue.