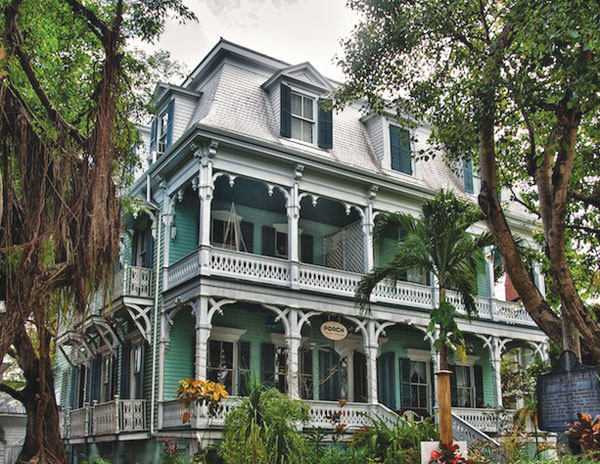 Like the best Key West stories, this one begins at a bar. I’m at the Porch, which specializes in craft beer and catchy wines and occupies a corner of a Victorian mansion with, indeed, a grand porch. Bartender Livi Lavery (a former New York City Ballet dancer who stands like she’s about to plié) serves a typical crowd, which in this—our nation’s southernmost city—means one of everyone. Today a boat mate, a stylish couple (clearly out-of-towners), and three girlfriends loudly recounting bad dates fill the L-shaped bar lit by a crystal chandelier. When a pirate impersonator enters, the full effect hits me: There’s truly no place like Key West.

It’s not just the great bars and infinite characters; it’s that the old never feels old here. This 1838 mansion, for example, was most famously home to Florida’s first health officer, Dr. J.Y. Porter, who is said to haunt it—along with some patients who succumbed to yellow fever. U.S. poet laureate Robert Frost stayed in the cottage behind it on visits between 1945 and 1960 and penned the poem “The Gift Outright” here. Of course, the town is also associated with the likes of Ernest Hemingway, Tennessee Williams, and Jimmy Buffett.

Nearby on Duval Street—basically Key West’s equivalent of New Orleans’s Bourbon Street, spanning nearly the width of the island—Nine One Five restaurant has invigorated another Victorian gem. On the swooping spindle porch, contemporary chairs match the classic sky-blue shutters. Belying the white picket fence, its menu is anything but small-town or conventional. Try ahi tuna domed over lemon-miso-dressed lump crab, or Key West grouper on creamed lentils with smoked tomato butter. Upstairs at Point5 lounge, cocktails are as savvy as the hot spot’s late-night nibbles (duck confit pizza, Asian ribs). Owner Stuart Kemp crafts his own tonic from a base of Peruvian quinine.

Stick with the retro vibe at two revitalized 1950s-era motor inns. One block off Duval Street, the Blue Marlin Motel‘s original marquee now fronts an updated facade of muted teal, orange, and khaki, with stainless steel accents. On Duval, the Orchid Key Inn was transformed from a derelict eyesore into a plush, stylish oasis with premium beds and, in a former toolshed, the hippest little poolside bar in town, the Orchid Bar. If you prefer hotels, check out the Ocean Key Resort & Spa, with a magnificent view of the harbor.

Because it has a coral foundation (keys arise from dead reefs), the area is not known for soft sand beaches. Best bet for swimming is Fort Zachary Taylor State Park (swim shoes recommended to protect your feet).

Always encouraging new means of expression is the Studios of Key West. Housed in a 1901 armory, the studios feature ongoing exhibits, concerts, performances, and workshops (songwriting, acting, silk-screening), all open to the public.

As the pirate impersonator breaks into magic tricks, it’s time for me to go. But before I do, I raise my IPA to him, the ghosts, and a town that never shows its age.