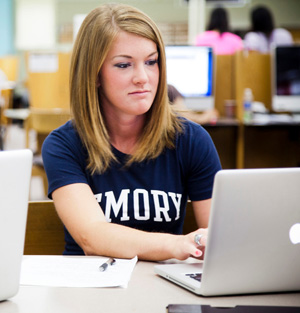 Right now a woman sitting at her kitchen table in Marietta can participate in the same digital sound design course—taught by Emory University professor Steve Everett—as a man at his desk in Delhi, India, without either of them having to pay a cent or leave their homes. The logistics are made possible by MOOCs—massive open online courses.

This revolutionary teaching method, which has received millions in funding from donors such as the Bill and Melinda Gates Foundation, took hold in 2012 and is predicted to be a major trend in higher education in coming years. Georgia Tech offered its first MOOCs in fall 2012 through Coursera—one of the largest providers of the innovative courses, with upwards of 200 programs from more than thirty universities. Emory joined Coursera in January 2013. Currently Georgia Tech offers nine MOOCs, and Emory has three.

Unlike online courses that are taken for credit (and require tuition payments), MOOCs don’t provide participants with individualized feedback on assignments or university-monitored discussion boards. This self-contained approach “will have the most benefit to people who are working and have other careers but want to learn more,” says Polly J. Price, a professor of law at Emory University who is teaching a MOOC on immigration and U.S. citizenship this spring.

Kimberley Hagen, assistant director of the Center for AIDS Research at Emory University and the instructor for a MOOC that focuses on AIDS, says it took her “about a nanosecond” to agree to teach the course.

“This gives me a chance to raise awareness and bring attention to various stigmas,” says Hagen. “It can increase participants’ information on AIDS and adjust their attitudes.”

There are concerns about the future of MOOCs. “The major challenge will be a monetary one,” says Hagen. While participants in MOOCs don’t pay tuition, there is a cost to produce the courses.