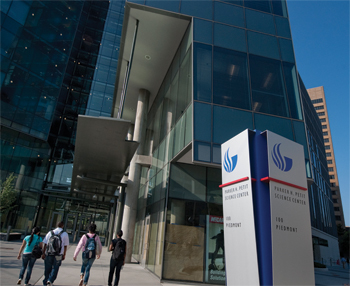 A brand-new football program isn’t the only sign that Georgia State is outgrowing its commuter stereotype. A Greek housing development—a cluster of nine three-story townhouses—opened this past fall. And in 2009, the university opened the $15.7 million, 87,000-square-foot, suite-style Freshman Hall, which houses 325 first-year students. The school expects to open two more dorms this fall.

However, Georgia State’s greatest asset remains its urban setting, with forty university buildings lacing through the streets of Downtown Atlanta. Drawing around 31,000 students, it is the second-largest school in the University System of Georgia. Through sixty-two degree programs, students can choose from 250 fields of study at the bachelor’s, master’s, and doctoral levels in six colleges: policy studies, arts and sciences, education, health and human sciences, law, and business. More than ten annual job fairs enable students in every discipline to start networking early.

At the leading urban research institution in the Southeast, graduate studies play a high-profile role. Both the undergraduate and graduate programs in computer information systems are ranked in America’s top ten by U.S. News & World Report. The public affairs program in the Andrew Young School of Policy Studies, as well as the Robinson School of Business’s part-time M.B.A., rank in the top 10 percent of graduate programs. The school’s highest accolade is the College of Law’s ranking as the nation’s best value by National Jurist.

Opened last spring, the 350,000-square-foot Petit Science Center houses the Neuroscience Institute, the Center for Diagnostics and Therapeutics, and the Center for Inflammation, Immunity, and Infection. The $141.6 million building offers state-of-the-art research labs, classrooms, and equipment for students in a range of science and health studies.

Students can find their niche through more than 275 student groups, twenty-four Greek organizations, and a variety of intramural sports. Album 88, an award-winning, 100,000-watt radio station, reigns as the most powerful student-run station in the country and can be heard all the way to North Georgia.