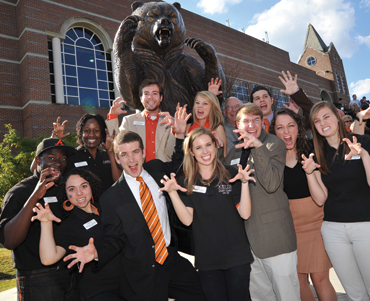 Eighty-five miles south of Atlanta, Mercer University lies in the heart of Macon. Established in 1833, Mercer sits on a 130-acre, magnolia-studded campus with historic architecture that exudes the Old South charm of its roots as one of the oldest universities in the South.

Mercer has just over 8,200 students and enrolls more valedictorians and STAR students (those with both top SAT scores and top-of-the-class rankings) than any other private college in the state. The average GPA of those accepted was 3.6, and U.S. News & World Report recently ranked Mercer as a top ten regional school for the twelfth consecutive year. The 2010 graduating class produced two Fulbright Students.

Mercer’s private-school tuition is steep at $30,560 a year. In an effort to lighten this burden, the university has created an optional four-year pledge: If students do not graduate within four years despite passing their classes and following regular academic advising, then the school will cover the full cost of any additional courses needed to graduate—and will waive housing and dining plan costs.

Greek organizations are a robust element of student life, with a quarter of students participating in Mercer’s seventeen sororities and fraternities. Other opportunities for involvement include more than fifteen club sports and around ninety organizations. As home of the Georgia Music Hall of Fame, Macon offers an active music scene. And new students can look forward to an upcoming change in their weekend ritual: The Mercer Bears are officially reinstating their Division I football team, with the first game set for the fall of 2013.