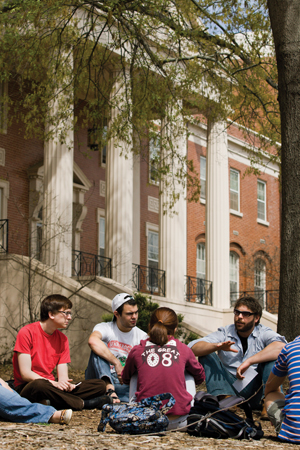 Bulldog football fans may be smarting from a subpar season, but the University of Georgia’s academic victories keep coming. The school climbed three spots to eighteenth in the U.S. News & World Report ranking of best public schools and was recognized by the Princeton Review as the seventh-best value in the nation. Three students became Rhodes Scholars in the past three years, and in 2010 alone, eleven were named Fulbright Students.

Located in Athens, dubbed the “Classic City” for its stately architecture and Greek name, UGA was founded in 1785 as the first state-chartered school in the country. Today, the 615-acre campus is home to sixteen colleges, including the only stand-alone school of ecology in America. Areas of study span more than 140 majors, and there are eleven preprofessional tracks. Top intended majors for this year’s freshman class include international affairs, biology, and business. This year, the campus also welcomed its first class of medical students in a partnership with Georgia Health Sciences University (formerly the Medical College of Georgia); a newly renovated, fifty-eight-acre Health Sciences campus is slated to open in 2012.

With nearly 34,000 students, UGA offers a range of extracurricular activities to help the school feel smaller. There are more than 600 student groups, and 21 percent of students pledge to one of fifty-eight Greek organizations. Sports are a serious matter at UGA, where football is nearly a religion and repeated national championships have been awarded to the gymnastics and equestrian teams. In addition to intramurals and club sports, UGA offers adventurous activities such as caving, white-water rafting, and horseback riding through the Georgia Outdoor Recreation Program.

Popular spots on campus include the grassy splendor of North Campus as well as the MLC, or Miller Learning Center, which opened in 2003 and houses 500 computers, ninety-six study rooms, and a Jittery Joe’s coffee shop.

The city that birthed R.E.M., the B-52s, Widespread Panic, and Corey Smith continues to have a strong music scene. Major concert venues downtown include 40 Watt Club, the Melting Point, and the soon to reopen Georgia Theatre—not to mention the famed music festival AthFest, which hosts more than 150 bands each June. With upwards of seventy-five bars within walking distance, UGA can’t seem to shake its “work hard, party hard” reputation: The Princeton Review ranked it the number one party school for 2011.