If you’ve missed attending or exhibiting at the Southeastern Flower Show (SFS) the last several years and have been hoping it would come back, be patient a little while longer.

A task force comprised of ten of the 21 board members of the Southeastern Horticultural Society (SHS), which hosts the show, met Tuesday, March 3, to begin mapping a new future for the show. This was the first meeting of this type under the tenure of Caroline Leake, the still-new executive director of the society. Leake, who has been on the job five months and was charged with pulling the task force together, is committed to bringing the flower show back to the Atlanta and state gardening communities.

“The task force has a great interest in reinventing the show,” Leake said the day after that meeting. She was careful to use the word “reinventing” because, she cautioned, “the show as it was will probably never exist again. The economics of it are difficult.” Formerly, the grand flower show sprawled over 70,000 to 100,000 square feet. “The last several shows have lost money or just broken even.”

“This is not a phenomenon unique to Atlanta,” she quickly added about the business challenges of staging a large flower show. As a regional example of another show that has shifted formats, she noted that the well-attended Antiques and Garden Show of Nashville has clearly moved more toward antiques than gardening.

Because formal discussions are just beginning, Leake could only talk in general terms about what type of future she and the task force might invent for future SFS shows. Even generalities, though, ramp up Leake’s enthusiastic belief that an event such as a flower show—she has co-chaired the SFS artistic division twice—is vitally important to developing a sense of community in the city and region.

“The task force wants to go forward and plan what the next show will be,” she said. “We don’t know when that will be. We are closing in on where. We do know that education and urban agriculture will be a big part of it.

“I think where we are headed,” she said, “is a smaller, more concise version of a very juried and judged flower show.” A judged show is important in meeting the needs of the hard core flower show folks, she said. Those enthusiasts, she emphasized, have been the backbone of the artistic division of previous shows. They are all over the state of Georgia and want to participate in an Atlanta show, she said, adding that the Garden Club of Georgia is probably one of the strongest state gardening associations in the country.

She knows that garden club members are likely an older demographic and believes that urban agriculture will attract younger people, whom she sees as more interested in horticulture than flower design. Community agriculture has been a major SHS emphasis in recent years, and Leake believes that adding it to the show would also give people something of value to take back to their schools and communities.

She believes some other elements of the recent show format will remain, just scaled back. Among those, she believes, will be mass flower arrangements, the artistic division, and landscaped gardens. There will also be a vendor section; but this one will be curated, Leake said, emphasizing that the show will feature high quality and substance throughout all sections.

When will the next show happen? Leake can’t be sure, but said she hopes the task force will produce a show in the next year or two. To make it work, “we are going to need the love and support that comes from all of the garden clubs,” she said.

She added that the task force will also need corporate sponsorship and individual patronage to avoid the financial troubles of recent shows, the last of which was at the Cobb Galleria in 2013.

As the task force moves forward, Leake said that she would like for those who have attended and supported the show in the past to know that the core mission of the Southeastern Horticultural Society is centered around the love of gardening and that the Board is committed to the communication and education of that message to the community. “Our Atlanta community is wonderfully rich and diverse, and we want to reach anywhere and everywhere to those who want to come and join us,” she said. 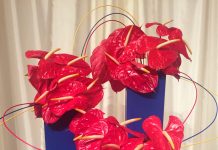