Like so many addictive things in life, attendees at the 10th annual Taste of Atlanta festival on Sunday afternoon got their first taste for free. Albeit, it was a sandwich sample from QuikTrip. Apparently, free was the right price for the QuikTrip chicken salad. Attendees were lined up elbow to elbow in order to suck down a taste. Or three. Also a hot taste at the weekend foodie festival sprawled across Midtown’s Technology Square: the marinara-accented meatball sliders at the Davio’s booth. Attempting to keep up with demand as meatball lovers hurled their required two “taste tickets” in his general direction, chef Bennett Hollberg told Dish: “The secret is really making the best marinara and using Kobe beef. After we cook the meatballs, we simmer them in the marinara. If you can cool them down and let them sit over night in the sauce, it’s best.”

Down on Spring Street, the lines were also long at the booth for West Midtown’s popular Urban Pl8. Within earshot of a guy hawking samples of “fillet cooked just the way you like it,” the Urban Pl8 staff was far busier, trying to meet the demand for their eatery’s signature sample. After fighting the mob, we got close enough to learn the in-demand dish was mini vegan veggie burgers, even at a top-tier three taste ticket price.

Across the 5th Street bridge, Waffle House associate Greg Rollings and staff were trying to keep up with the demand for pecan waffle samples as four sizzling waffle irons cranked out product. “The only thing that really bogs us down is the cook time,” Rollings lamented. “It takes three minutes to cook a waffle.” Over the weekend, Rollings estimated the chain would whip up 3,000 servings for Taste patrons, all for one “measly” taste ticket each. So why only one ticket for a hulking hunk of nut-encrusted golden goodness? Rollings beamed and said: “We’re all about value!”

Attendees Jamie Badois and Crystal Alexander, meanwhile, were all about the VIP tent white wine samples being poured into Taste of Atlanta wine glasses sponsored by Cadillac. But the friends didn’t mind posing for a photo op at sponsor Amstel Light’s beer booth — with their wine and a complimentary potted basil plant in tow. “I’ve lived in Atlanta for 22 years and this is my first Taste,” Badois said. “But I’m definitely coming back. With as much as we’ve eaten, I won’t be cooking for two days either!” Alexander said she loved the California Dreaming babyback ribs and the grilled artichokes at the Brick Top’s booth in particular. “I’m full and a little tipsy so two thumbs up!” she cracked. “But don’t count us out just yet. We haven’t made it down the rest of this street yet. We may need some sushi!” 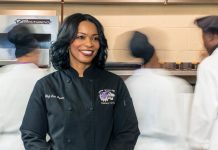