As much as I hate standing in my steamy kitchen night after night, sliding skins off blanched tomatoes and peaches, I love eating locally grown food year-round and opening my cabinets to rows of colorful jars filled with summer’s bounty. That first taste of blackberry jam in the dead of winter? Worth every curse word. Here are a few tricks that can make the process a little less painful.

Follow the instructions. Exactly.
Canning is not the time to get creative with recipes. The idea is to kill micro-organisms that cause illness. If a salsa recipe calls for less onion than you’d like, don’t add more; it could lower the acidity level. If you’re supposed to process the jars in a pressure cooker, don’t substitute a boiling water bath.

Prep in advance.
For the sake of freshness, it’s best to prep and can your produce on the same day it’s picked. That said, there’s nothing wrong with chopping all the ingredients for salsa or jam one day; sticking them in the fridge overnight; and then cooking the food, filling the jars, and processing the next. Just don’t repeatedly heat and cool foods before canning; you’ll mess with the texture.

Enjoy often.
After all that labor, it’s tempting to save your jars for special occasions. But canned produce is not like Twinkies—it doesn’t last forever. As soon as a crop is out of season, start popping those lids.

Cut a deal.
If your family goes wild for peach cobbler or applesauce, negotiate with your friendly farmer for a bulk discount on favorites. If you get to a farmers market early, ask whether you can purchase a marked-down box of “seconds” at the end of the day. Be ready to prep any bruised produce as soon as you get home.

Be reasonable.
If you aren’t going to eat more than a quart of tomatoes every other week, don’t put up 100 jars. It’s okay to can only a few pints if that’s all you’ll need throughout the winter.

This article originally appeared in our June 2015 issue under the headline “Put a Lid on it.”
Advertisement 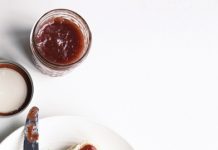 Get to canning with Preserving Now’s Lyn Deardorff