In a city that often feels like a tangled patchwork of sovereign territories, these independent grocers anchor their neighborhoods with a strong sense of place and pride. (And maybe even a really great cheeseburger.)

Sevananda
Sevananda has been pushing organic produce since 1974—long before Whole Foods arrived. At this co-op, you’ll find all-natural versions of your typical household and pantry items as well as homeopathic remedies such as dandelion root and dried orange peels. If you like to shop for your cashews and quinoa in bulk, this is the place for you—plus there’s a hot bar offering spiced collards and spelt biscuits. 467 Moreland Avenue, 404-681-2831

Savi Provisions
What started as a gourmet grocery in Inman Park in 2009 is now a four-location local chain. (Owner Paul Nair also opened an Indian restaurant, Jai Ho, in March.) Savi’s inventory might be a little pricey for everyday shopping—customers are more likely to drop in for a $7 pint of Honeysuckle Gelato than a Bic razor—but those who live nearby swear by the dinner party–worthy cheese selection. 287 Elizabeth Street, 404-523-3131

Little’s Food Store
Find local Emerald City Bagels and Creature Comforts beer alongside cheap staples like Community Coffee in this Cabbagetown market’s lone aisle. The main draw for regulars, though, is a greasy, no-frills burger served on a soft potato roll. Order at the cash register and then grab a black leather barstool at the five-seat counter facing a glass cabinet full of vintage Atlanta knickknacks. 198 Carroll Street, 404-963-7012

Carver Market
Carver opened its doors in late 2015 with a mission to become an oasis in South Atlanta’s food desert. The 2,600-square-foot Lakewood Heights store now sells AtlantaFresh yogurt, Golda Kombucha, and fruits and vegetables from a network of area farms, plus it offers produce discounts to SNAP beneficiaries. Community Grounds operates a coffee shop inside the market so you can sip and stroll. 1297 McDonough Boulevard, 404-586-0692

Oakhurst Market
Neighbors praise the homemade bread and soups, not to mention the meat counter manned by an on-site butcher; it runs the length of the store and is typically stocked with Pine Street sausages, house-roasted deli meats, and even New York strip steaks. Oakhurst is full of families, and you’ll see parents picking up ready-to-eat suppers like pork ragu and mustard-glazed chicken (available weeknights if you call ahead) and kids congregating around the display of throwback candy like Tootsie Rolls and gumdrops sold by the pound. 650 East Lake Drive, 678-732-3109

Editor’s Note 9/21/17: The original title of this story was “Yes, Atlanta has ‘bodegas.’ Here’s where to find them.” We put the term bodega in quotations because we were not using the term literally. However, given recent controversies over use of this term, we feel our intentions could now be misconstrued. 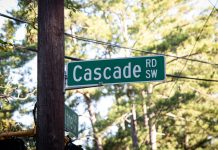