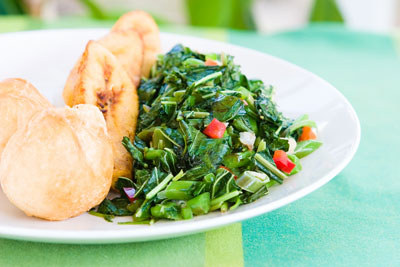 At the peak of summer, many omnivores don’t bother looking up from their tomato sandwiches long enough to notice that other plants have faded in the heat. Lettuce, spinach, and Swiss chard have long given up the ghost. But then, out of a growing number of gardens around Atlanta, comes the lyrically named callaloo that thrives in July. A staple plant in the Caribbean, callaloo has begun appearing in local farmers markets as a summertime spinach substitute, rich in iron and vitamins A and C.

You may know it by its more prosaic name: pigweed. It’s really several species of the amaranth plant lumped together for convenience, or perhaps out of disinterest. It grows as an annual in the States, reaching heights of six feet before dying out in cold weather. Young leaves can be eaten raw in salads, but more commonly the leaves and peeled stems are chopped and sauteed with onions, tomato, Scotch bonnet chiles, garlic, and sometimes a little saltfish for flavor. (There’s also a soup called callaloo in Trinidad and Tobago, but it actually features a different plant.)

Michael Joseph, a Guyana native who grows vegetables in his Lithonia garden, sells callaloo at his MJ’s Vegetables stand on Fridays at Lilburn Farmers Market and Saturdays at Snellville Farmers Market.