Home Restaurants A Taste of the South’s culinary evolution 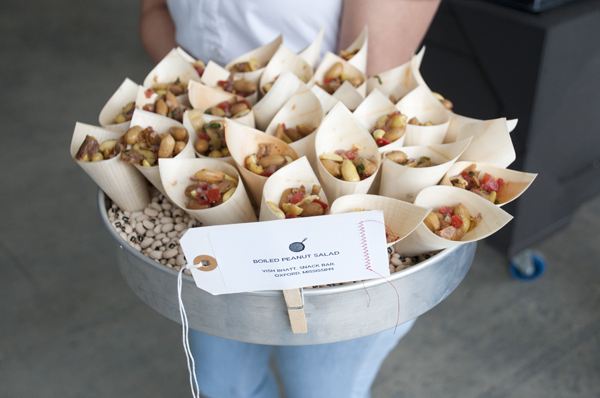 At the New South Family Supper, held last night at work-in-progress Ponce City Market, a server brought over Memphis-based chef Kelly English’s gulf crabmeat and flasher fish crudo tossed in Greek yogurt and burnt butter—one of the dinner’s twenty-one dishes prepared by chefs from Atlanta and throughout the South. When we tried English’s dish, conversation blissfully stalled to allow for a moment of absolute pleasure. If this was a taste of the New South, everyone wanted more of it.

The dinner, organized by Anne Quatrano and Clifford Harrison of Bacchanalia, drew approximately 135 guests as a benefit for the University of Mississippi-based Southern Foodways Alliance. Proceeds went to the SFA’s oral history and documentary film projects, which chronicle the evolving nature of Southern cuisine and the people creating these changes. Each year the SFA conceives of a theme around which it builds its programming: This year’s topic is “women, work, and food.”

There was nary a pimento cheese sandwich in sight. Upon arrival, guests were ushered to the patio of Dancing Goats Coffee Bar and offered a vodka and rye whiskey cocktail, featuring a spicy rosemary-tamarind syrup. Passed hors d’oeuvres included smoked brisket with Coca-Cola sauce and mustard cole slaw by Eddie Hernandez of Taqueria del Sol. Paying homage to where the evening’s bounty came from, the migration to the dining room was led by several Atlanta-area women farmers, each one holding tree branch scepters and crowned with floral tiaras.

The food was served family-style, and there was plenty of it. Adam Rapoport, editor-in-chief of Bon Appetit was in attendance and he said, “Sometimes you go to benefit dinners that mean well, but you end up sitting for hours with too many courses and it feels almost like a labor of love. This was just pure love. There was a harmony in the cooking even though the food had influences that varied from Vietnamese to Cajun.”

“There is something fertile and rich about Southern cuisine that you don’t get in other cuisines in America,” Rapoport said. “There’s a soul to it that deserves to be saluted and treasured.”

Andrew Knowlton, restaurant and drinks editor at Bon Appetit knows something about the local food culture. An Alpharetta native, he recalled reading his father’s subscriptions of Knife and Fork, the longtime dining newsletter published by Atlanta magazine’s Christiane Lauterbach. “That was the Bible,” he reflected. “My dad still has binders full of her reviews. I love the direction Atlanta cuisine has taken.”

So does chef Hector Santiago. “We feel very global here, but it’s still local. I love how SFA is about showcasing the groundwork, about the people doing the job everyday.”

At the end of the evening, the chefs stood in front of a satisfied crowd, receiving a well-earned standing ovation. “One of the things I think is important to do at event like this is hold up a mirror to a city and say, this is what your region looks like,” Edge said. “If you weren’t paying attention, or even if you were, here’s a freeze-frame moment—the chefs assembled here, the voices here, this is what the South looks like now, and this is what the South is going to look like.”

Also check out some quotes from some of the women chefs cooking the meal on Bon Appetit’s site.