Heading into the holiday season last year, Urban Cannibals owners Doria Roberts and Calavino Donati were secretly thrilled. The singer and the chef, who had been trying to get pregnant, were attempting to hide Roberts’ growing belly from friends and customers. Their elation turned to shock, however, when a medical exam revealed not a baby, but an aggressive fibroid tumor that had morphed from baseball to grapefruit size in weeks. During surgery, doctors discovered that the tumor had begun fusing itself to Roberts’ nervous system and that she was weeks away from becoming incapacitated or worse.

“We didn’t know I was in any kind of danger,” Roberts recounts. “We thought I was pregnant. We were devastated. Grateful is not a big enough sentiment to describe how I feel now. I’m lucky for many reasons.”

Now fully recovered, the 20-year Atlanta singer-songwriter is celebrating life with her 12th annual birthday concert August 9 at the Variety Playhouse to benefit The Giving Kitchen, the Atlanta restaurant industry nonprofit inspired by the community support that surrounded late Atlanta chef Ryan Hidinger after he was diagnosed with late-stage cancer in 2012. As a member of the Atlanta Grammys chapter, Roberts was financially assisted through her $40,000 medical crisis by MusiCares, the nonprofit arm of the Grammys.

But Roberts—who has returned to her oven on weekends, turning out her trademark biscuits and brownies at Urban Cannibals to the delight of customers—realizes others in the restaurant industry don’t have her option. “This could have been my wife,” she says. “She wouldn’t have had MusiCares to help her. I love that there’s a nonprofit in Atlanta for the restaurant industry. It’s a way for me to pay things forward. I’m extremely grateful to MusiCares, but they have Bruce Springsteen and Carole King. I wasn’t going to be able to raise $150,000 in a single evening for them. This is a way to help people in my wife’s industry locally.”

Donati, the visionary chef behind Roman Lily Café before opening Urban Cannibals in East Atlanta village five years ago, is making sure Roberts’ return to the stage is memorable. The singer’s concert this Saturday marks her headlining debut at the Variety Playhouse, after opening for the likes of Me’Shell N’degeocello and Jennifer Nettles there over the years. Scared that she might not survive her surgery in February, Roberts shared with Calavino her regret at never having headlined the Little Five Points venue. While Roberts recovered, Calavino secretly called Brad Syna at the Variety and booked the birthday surprise.

“When I came out of my pain killer haze, she told me what she had done!” Roberts relates with a laugh. “Because that’s who my wife is. I don’t make bucket lists. I don’t believe in them. For me, it’s about living my life as a working musician. Asking for anything beyond that is greedy. This is a tremendous gift.”

For the fundraiser, Roberts is calling in all her favors, too. She’s already secured an autographed microphone from The Cure’s Robert Smith and an old friend from her Eddie’s Attic days may show up as a surprise guest. King of Pops carts, meanwhile, are introducing the singer to new fans by distributing free wristband downloads of her music to customers.

“We’re amazingly lucky,” Roberts says. “Our Urban Cannibals customers made us food, baked, brought flowers, loaned us an Apple TV, grocery shopped for us and basically took care of us both for months. Throughout this, I’ve learned that it’s okay to be afraid. Just because I’m an out lesbian in an interracial relationship living in the South doesn’t mean I leave the house every day in a Wonder Woman cape.”

For tickets or to learn more about The Giving Kitchen go to the concert’s Facebook event page. 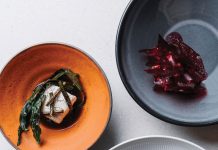