Andy Minchow, founding partner of Holeman & Finch and an acclaimed mixologist, will open Ration & Dram, located at 130 Arizona Avenue, in late August or early September. The dual-level restaurant and bar is named after the military term for a portion—usually of food—(ration) and the nautical term for a unit—often mentioned with whiskey—(dram). Since Minchow, who is working at the Drafting Table for the time being, has a 4-year-old and the restaurant is near a big soccer field and a pool, he decided to make Ration & Dram child-friendly—at least during the day. Minchow hopes adults will enjoy beer on tap (each of 12 taps is assigned a category of beer, such as IPA or imperial) and light, European-style cocktails with vermouth and soda water during the afternoon, and then come back after 9 p.m. without the kids in tow for more potent beverages made from eclectic small-batch spirits.

Minchow also plans to host events like Cookies and Cocktails once a month, in which the adults go upstairs and learn to make cocktails, while the children are taught cookie- or cupcake-making downstairs.

“So you can go out and enjoy yourself without getting a sitter,” he explains.

Ration & Dram won’t have a kids’ menu; instead, child-friendly items will be integrated into the regular menu.

Open for dinner, as well as weekend brunch, Ration & Dram’s menu may include Dutch oven chicken with vegetables and grains, “Star Wars” pancakes, and sausage with pancake batter and maple syrup. Celery and carrot sticks with yogurt ranch will sub for fries.

As casual spot with concrete floors, dark woods and metals, and a patio, Ration & Dram will have a lower price point than Holeman & Finch. Minchow says “you should be able to have a drink or two and get full for under $30.”

Restaurant Eugene replacement Eugene and Elizabeth’s is on hold 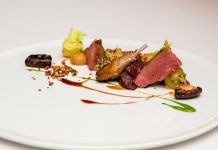