Ticha and Dan Krisksy—owners of Tierra, just up the street from Ansley Mall shopping center—have decided to close their restaurant. They will serve the restaurant’s final meal on February 17, 2012, the day after Tierra’s thirteenth anniversary.

Ticha told me in a phone conversation that economic doldrums, a looming rent increase from the landlord, and lesser issues like equipment breakdowns all fed into the decision to shutter. The timing also proved fortuitous when Dan was offered a job at Atlanta’s outpost of Le Cordon Bleu College of Culinary Arts, which he started last month.

Last week, the Krisksys informed their staff, many of which have been with the restaurant for a decade. Ticha says that she’s focusing on enjoying the restaurant’s last two months in business. “Even on the stressful days, I remind myself, I’m doing what I love,” she says.

The restaurant will close for vacation on December 24 and reopen January 3 with a winter menu, which will feature seasonal staples like shrimp baked in Brazilian cheese, trout relleno, and beef tenderloin over gordita with Mayan green sauce.

And how will the die-hard fans of the restaurant’s tres leches cope? Ticha, who says that she is staying too busy to contemplate what she will do after the restaurant closes, promises that customers will be able to stay in touch via Twitter and Facebook to learn how to order the cake. 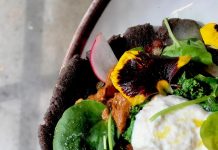