Home Uncategorized As a misfit teen, R. Thomas was my late-night savior

In the early 1990s, R. Thomas felt as out of place in the South as I did. A quirky, San Francisco–inspired health-food restaurant that stayed open late was a hard sell at the time, even in Buckhead. The Buckhead of that era was no less glamorous than it is now, but it also had some grit. You could get lost in an avalanche of musty fiction at Oxford Books or arcane punk at Fantasyland Records (actually, you can still do the latter). But R. Thomas was neither glam nor gritty. It was just plain weird.

Of course, there was nothing weird (or glam or gritty) in the then homogeneous part of East Cobb where my family recently had relocated—and where I often was asked by classmates, in that not-friendly, just-north-of-puberty way, “Uh, where are you from?” My answer—Connecticut by way of Florida by way of Nevada—did not clear things up. My subsequent “I’m half-Lebanese” was met with blank stares.

Neighborhood kids were puzzled by the monstrous, carrot-stained Champion juicer that occupied an obscene amount of counterspace in the cramped kitchen of our 1970s-built “contemporary” home. The cooking of my father, a lapsed vegetarian and raw-food enthusiast, only served to further the confusion. Why does that salad in the fridge have so much parsley in it? Is that seriously a frozen octopus in the freezer?

I don’t remember what exactly led me, when I was 17, to R. Thomas. There was no search engine into which to type “late night vegetarian friendly restaurants atlanta.” We’re talking about a time when “early adopter” meant standing in line at Criminal Records for the midnight CD release of Smashing Pumpkins’s Siamese Dream (which, it should be noted, was no Gish). Back then, knowledge of everything alternative and off-the-beaten-track was the currency of the cool kids (some things never change), and word of mouth was the primary means of discovery (other things do). Anyway, like any self-conscious and self-convinced “in-the-know” high schooler, I made it my business to root out all things antithetical to the suburbs. R. Thomas was one of those things.

I had no idea that it was the vision of a former fast-food exec who wanted his customers to eat better (Richard Thomas died just two years ago at age 82). But I did know that it was a concept foreign to the chain restaurant–choked thoroughfares I’d begrudgingly grown accustomed to closer to home. And it was instantly familiar. Like my own house, the dining room was decked out with ample rattan and greenery (this was after and, given recent trends, before either was stylish). And not only could I eat food similar to what I’d grown up on (falafel and tabbouleh might not have been every ’90s teenager’s comfort food, but they were mine)—I could eat it at 2 a.m.! And I did. All the damn time.

No other place came as close to satisfying my simultaneous yearnings for discovery and acceptance as this weirdly tropical and uncharacteristically health-focused restaurant. When I found R. Thomas, it was a restaurant both too late and too early for its time. It didn’t fit in then (and wouldn’t catch on for a few more years), and I therefore believed in my teenage heart that it was just like me. It was exotic in the same way that I believed others perceived me. I didn’t want to be seen that way, but R. Thomas owned it. I figured maybe I would one day, too.

And why I love them

Collard Kale Salad
Sure, kale salad is everywhere now. But I challenge you to find one that tops R. Thomas’s from way back when. The secret is in the highly marinated collards.

R’s Stuffed Portabella
Scoff all you want; this dish was a revelation when I first ate it. Life is now filled with more sophisticated food, but a seared portabella cap with mashed potatoes and garlicky green beans brings me no less joy. 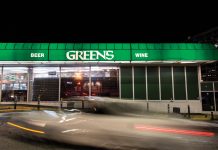