Home Local Foods At least this compromise comes with peaches 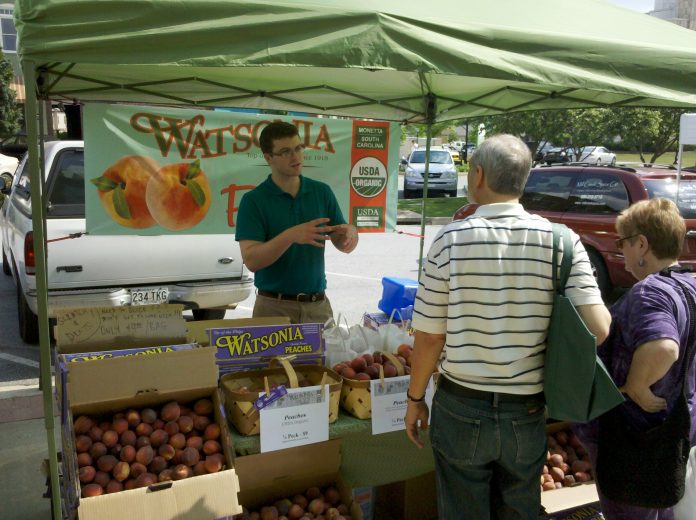 Five years ago, you would have had trouble finding Georgia’s most iconic fruit at a local farmers market. Peaches, like Vidalia onions, are usually grown on large commercial farms and distributed nationally through a system that gives little preference to local retail outlets.

Then a guy named John Short came along. Since he grew up in Georgia’s peach country, when he moved to Atlanta he naturally assumed he could show up at any farmers market and buy a local peach. When he discovered that wasn’t the case, he called up his old friend Will McGeehy, a fifth-generation farmer in Crawford County, and worked out a way to transport and sell fresh-picked peaches at local farmers markets. Now in his fifth season, Short oversees a network of sellers that represent Pearson Farm all around Atlanta.

A true innovator, however, is rarely left alone, and Short is no longer the sole peach purveyor at Atlanta-area farmers markets. Inspired by Short’s success, a guy named Brandon Smith is now running a similar distribution team for Watsonia Farms peaches.

Smith gives credit where it’s due. He started as a member of the Pearson crew. “We were constantly asked about the availability of organic peaches,” Smith says. “I knew that there were large markets, such as Peachtree Road, that required organic or naturally grown certification. … And that’s how the conversation started with the Watsons.”

Like Pearson Farm, Watsonia Farms is run by a multigenerational farm family—currently Jerry, Joe and Jeph Watson. However, there are significant differences between the two products.

Pearson peaches are Georgia-grown. But they are raised conventionally—meaning the fruit is sprayed with pesticides. Because they are sold with the fuzz still on, they should be washed thoroughly before eaten.

Watsonia, on the other hand, offers Certified Organic fruit in addition to conventionally grown. But these are not Georgia peaches. They’re grown in Monetta, S.C, between Augusta and Columbia.

In a perfect world I’d prefer to buy pesticide-free Georgia peaches. Unfortunately, except for a few periodic peaches that pop up throughout the summer, unpredictably, from small farms, they are almost unheard of. So I’m forced to prioritize my allegiances: it’s either organic Watsonia peaches or Georgia-grown Pearson peaches. Not exactly Sophie’s Choice, but still a bit of a dilemma.

I don’t want to complain too much, though. After all, thanks to these peachy entrepreneurs I can buy local peaches at market, and I even have a choice of brands. And I have to admit, it’s hard to be too upset about the compromise, when either way I end up with a really fresh, really delicious piece of fruit. 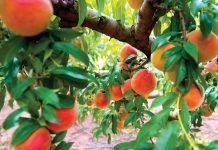