Home Restaurants Atlanta chef Richard Blais inks cookbook deal
This just in: Atlanta Flip Burger Boutique guru and “Top Chef All-Stars” winner Richard Blais has inked a deal for his first cookbook, set to hit book shelves in November 2012. Trade publication Publisher’s Marketplace first reported the deal. According to PM’s report, Clarkson Potter will publish Blais’ inaugural effort focusing on his “creative and often quirky approach to cooking and food” and will contain 100 to 125 recipes, along with 75 to 100 four-color photos.
No title was immediately forthcoming.  In an interview with ATL Intel this past March, Blais hinted that a book would be a part of his post-“Top Chef All-Stars” branding campaign. “Anytime you get to impact how people eat and how they think about food, that’s something I’m interested in,” Blais told Atlanta magazine.
OK, Atlanta. Which of Blais’ signature dishes should be included in his upcoming cookbook? Tell us in the comments section below.
Advertisement 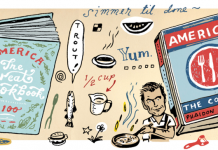 Cook like an American: Two new books address how we eat