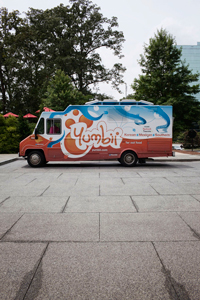 In what is the first step to a major legal victory for Atlanta food trucks, Atlanta City Council passed an amendment Monday allowing vendors to operate on certain public streets around the city. That means that as soon as Mayor Kasim Reed signs the bill (or seven days from now when the bill becomes law immediately), you could be in line to buy tacos from a truck parked in a metered space. Previously, trucks could only obtain permits to vend on private property.

Public spaces will be limited to Downtown’s government center, Atlanta City Hall, and the Georgia State Capitol. Supporters of the amendment ultimately have their sights on broader jurisdiction that would allow trucks to vend on all public spaces in Atlanta.

While the bill was drafted by a working group inside the mayor’s office, Yolanda Adrean of District 8 worked with Kwanza Hall of District 2 to propose the ordinance to amend Chapter 30, Article XXIII (Vending on Public Property).

“Most cities have food trucks that bring with them wonderful food options,” Adrean says. “They’re a great opportunity for small business owners, for restaurant owners who want to spread their food concept elsewhere, or for people who want to test new concepts before committing to a brick-and-mortar.”

Greg Smith, president of the Atlanta Street Food Coalition, has been lobbying on behalf of food trucks since 2010. Smith, a practicing attorney specializing in small business matters, successfully lobbied to change the way the City handled vending permits on private property in 2011. Public property had been another matter.

“There were a lot of headwinds against us on that when we tried to get something done,” Smith says. “It has taken until this year for change to finally come.”

Howard Hsu, founder of the Atlanta Food Truck Park and Market and owner of the Sweet Auburn Barbecue truck, hopes that Atlanta’s food truck culture is now closer to being similar to the one in Los Angeles, “where trucks vie for territory.”

“[The City of Atlanta] just needs to work with food truck owners and probably the Street Food Coalition to pay attention to what our needs are,” Hsu says. “There is plenty of tax money to be made off food trucks.”

As for whether food trucks will one day be able to vend in additional public spaces, Adrean explained that the amendment is the first of many phases. She hopes to expand the order to public streets around parks.

“I predict that people will be so thrilled with the vendors that Council will want to expand the program quickly,” she says.