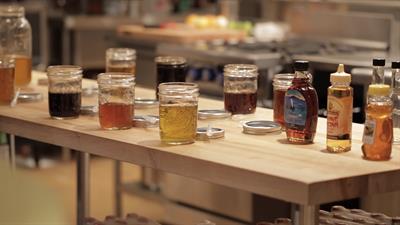 If you’re familiar with the average craft cocktail menu, you’ve certainly seen the word “bitter” in a list of ingredients. Maybe you recognize popular brands like Angostura or Peychaud’s. You might even own some, following the recipe of your favorite drink. But do you really know what a bitter is? Or that you—you!—can make your very own?

Melissa Hayes—LEON’s Full Service bartender and recently-departed beverage director of Holeman & Finch, Restaurant Eugene, and H&F Bottle Shop—wants to show you how. Hayes has partnered with Preserving Place, the cooking school and shop at Westside Provisions District, offering two classes: Homemade Cocktail Concoctions and Bitters & Tinctures. The classes started earlier this year and will continue into the spring.

Break it down. What is a bitter? Bitters are initially made up of tinctures; a tincture is an alcoholic extract or a neutral grain spirit. So bitters are just a more complex version of that. From the tincture, a bittering agent is added—plant extracts like gentian or quinine are the most common. Tons of different herbs can be made into a bittering agent.

How do you introduce people to these concepts? One of the ways I teach is to bring in jars of different tinctures and allow everyone to blend them individually. They create their own aromatic bitters.

How do attendees respond? Everyone is apprehensive at first. We go around the room with droppers—ten drops of cinnamon, five drops of mole or coffee. People start to realize it’s like cooking—you can go with what you like. Then everyone gets more comfortable. But once people see the dropper, they switch from calling you a bartender to a mixologist!

What’s your take on that debate? I prefer bartender. I’m in this more for hospitality. I’m a middle child! I think “mixologist” makes it sound a lot more than it is. I started off slinging drinks in college bars, pouring four bottles at once, knowing the different counts.

That high volume is nuts. What was your first craft cocktail gig? It was LEON’s. I worked with Miles [Macquarrie] on the opening team. I used to tell him all the time that I didn’t like whiskey. He’d be like, “You can’t say that out loud.” He’d always make me whiskey drinks. I’d say, “I like this, but I don’t normally like whiskey.” He’d be like, “No, I think you like whiskey.” I learned how to appreciate it.

So how is it behind the bar now? You spent several years running beverage programs. I certainly loved beverage direction, but it was a lot of work. I think I was starting to wonder if I was doing all that work because it was the next natural step, or because I was really passionate about it. You know, it’s a lot of logistics, ordering, and inventory. Working at LEON’s I have more time. I go on runs, see my family more. Also, full disclosure, I’m engaged to one of the owners. I’m partial, but I feel like it’s such great energy. People are excited to be here.

How did you link up with Preserving Place? I was teaching classes back at Holeman. We’d teach people how to build a home bar, why you’d stir a drink instead of shake it, all the basics, some history. My sister visited Preserving Place and thought what I was doing at Holeman could work over there. I got in touch with the owner, Martha [McMillin] but things kind of dropped off. When I left Holeman, I was lamenting that I wouldn’t be teaching classes. So I got back in touch with Martha. I wanted to make sure it was something different though, because I think Holeman is going to continue classes.

What’s it like teaching in that space? It’s like an interactive kitchen. Her space is set up like a workshop—a bar isn’t made to have 10 people behind it! And we keep preservation in mind. Syrups, bitters, and tinctures are a means of preservation. They are ways of extracting flavor and getting a longer shelf life. We came out with those two class concepts, and we have hopes of branching out.

What’s the takeaway for your students? I try to teach in a way that gives them the flexibility to create their own recipe. I show them a way to create orange bitters, and if you changed a couple things, well now you have celery bitters. So you’re going home with a skill set, not just a recipe. And depending on the class, attendees walk away with jars of tinctures, or a shrub, or tonic shrub.