Over the past few years, Atlanta’s restaurants and bars have been adding something new to the menu: games. At Leon’s Full Service and Empire State South, there’s bocce ball. At Sister Louisa’s Church, Victory Sandwich Bar, No. 246, and a few other spots, they play ping pong. The newest addition I’ve seen is a three hole putt-putt course at the Optimist and Oyster Bar.

Of course, the games keep people hanging around longer, maybe having a drink or two more than they would have otherwise. They’re a way to distinguish the place and get people talking about it. The formula is rather simple. Rarely, though, does the formula work so well that Ben Stiller goes on national television to talk about playing ping pong at a bar, Church, and then describe the owner, Grant Henry, as the Rafael Nadal of ping pong, like he did last night. 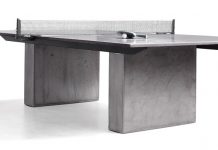 Splurge or save: 3 ping pong tables meant to stand out