Bhojanic Decatur had served locals and nearby Emory students for 12 years along Clairmont Road but closed in November 2015. Now we see why: Earlier this month, owner Archna Becker opened Bhojanic Market on Emory’s campus in the Cox Dining Hall.

Becker opened a similar concept adjacent to her Decatur restaurant in 2009 but closed it in 2012 to make room for catering. Now, she is opening a catering and corporate facility on Piedmont and Cheshire Bridge roads. She hopes to open three to five Bhojanic Markets around Atlanta, particularly in Midtown and Alpharetta, in the next two years. Future locations will have café-style seating for 20, a chai bar, marinades, and more. “We’re trying to provide healthy meal solutions for families who don’t want to go out every day but want home-style food,” she says. “We don’t add cream. It’s all fresh ground spices.”

Also on the horizon: Becker is writing a cookbook, tentatively titled “The Family Trait,” that will highlight regional Indian family recipes dating back three or four generations. Becker estimates the book will take three years to finish. 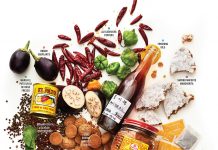 How to shop like a chef in Atlanta: 5 stores for unique goods