Home Restaurants Bistro Niko’s Gary Donlick basks in glow of Esquire “Best New Restaurant”...
For the first time in a year, Bistro Niko chef Gary Donlick had someone else cooking and waiting on him Monday night in New York City.
Donlick and 19 other honorees were feted at SD26 as Esquire magazine officially unveiled its 27th annual 20 “Best New Restaurants 2010” as selected by critic John Mariani.
“It was amazing to be in a room full of so many talented people like Jean-Georges [Vongerichten] and Mario Batali,” Donlick told Dish as he boarded a plane back to Atlanta.
From the moment the French bistro opened last fall, the newest addition to Pano Karatasso‘s Buckhead Life Restaurant Group empire bustled with curious diners eager to see and be seen.
But they told their friends and returned for Donlick’s roasted chicken, escargot and mushroom tartes. Those were among the dishes served to Mariani when he popped in back in January.
“We knew he was coming,” Donlick recalls. “We picked a few things for him to try and hoped that he enjoyed the concept. He’s a very influential critic. It was a huge honor for us just to have him come into the restaurant.”
As he accepts well wishes from Niko regulars today, Donlick says he’s grateful to be working in such a well-received Buckhead dining spot.
“The Esquire award is incredible,” he says. “But equally incredible for us is to see people come back and back and back to see us. It’s a real blessing.” 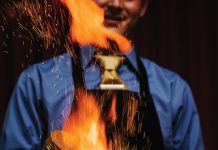 Extravagant tableside service is poised for a comeback in Atlanta