After the original Bocado shuttered on the Westside last year after suffering multiple break-ins, Pat Pascarella’s mozzarella bar Bastone took its place. But Bocado’s hamburger spinoff at Avalon, Bocado Burger, soldiered on. However, since owner Brian Lewis has been unable to secure a new intown home for the small plates and cocktail spot, he decided to take the Alpharetta location back to its roots. Simply put, Bocado Burger is now Bocado.

It’s more than a name change—the menu is new, the kitchen was overhauled, and the space has been revamped. Don’t worry—the famous burger is sticking around, as are several of the burger styles previously offered, including the Southwest burger and “animal-style” Avalon burger. About a quarter of the menu will be comprised of signature dishes from the Westside. The rest is shared plates like serrano ham and parmesan croquetas, grilled artichokes, BBQ smoked chicken wings, and leafy green salads. Many dishes will be prepared on a new Italian hardwood smoker. Even the burger buns will now be made inhouse.

“It’s a tough market and we use almost Prime-level beef. With the increase in food and labor costs, it’s challenging to provide the full experience on a burger price point,” Lewis says. “Surprisingly, Avalon has become a destination for a lot of intown folks. We get a lot of people who know us from the Westside.”

While Bocado Burger’s beverages focused on beer, Bocado’s drink offerings are more refined. Expect single-vineyard, biodynamic, organic wines, as well as the hand-crafted cocktails the original Bocado was known for. Options include an Aperol spritz with prosecco and orange zest; a margarita with strawberry, Herradura tequila, orange liqueur, and lime; and an old fashioned with bourbon, cola syrup, barrel bitters, and orange peel.

“We’re really trying to reconnect with people in the neighborhood,” Lewis says. “We’ve always been known for creative plates and our beverage program.”

The space has been renovated to match the sophistication in the new menus. There’s new lighting and furniture. The bocce court is gone in favor of greenery. Not all of the playfulness has been lost, however—nostalgia-inspiring desserts include soft-serve ice cream cones, sundaes, and hand-spun milkshakes.

“When the time is right, we’ll be back in Atlanta as well,” Lewis says.

See the full menu below. (Tap to enlarge.) 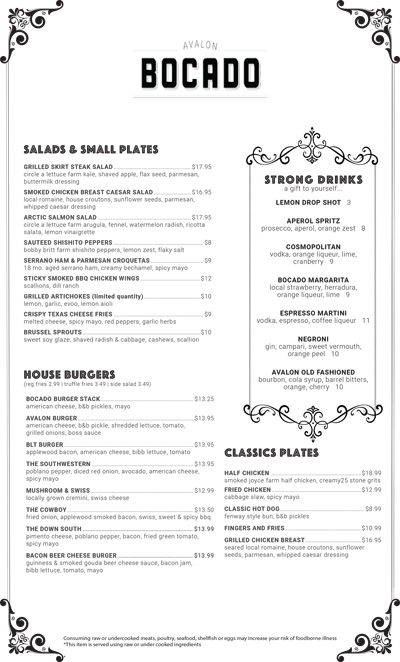