Big changes are in the works at the Irwin Street Market. According to Jake Rothschild, founder of Jake’s Ice Cream, Picnic! has moved and now shares space with Hilda’s, forming a larger dining room with table service for the entire market. The actual market is expanding into the Funky Monkey space and adding a tasting room where customers can sample the goods being sold, from jams to mustards to pestos. A new bakery, coffee shop and tearoom called JDR Delishery has taken over the old Picnic space and serves house-made bagels, pies, macaroons, truffles and more.

Jake’s Ice Cream will remain in its current location but is undergoing renovations with the intention of creating a more retro, 1940s ice cream parlor look. In addition, an atrium-like patio with a European feel will open in the next month and face the Beltline. It will feature antique windows, a mid-century fireplace, an Italian stone deck, and tables with umbrellas, and seat 60 people.

“Our whole business changed the day the Beltline opened,” says Rothschild, who is also behind JDR Delishery. “It’s now the center of our operation.”

As for JDR Delishery, it has already begun serving its Liliputian pies, about the size of a typical slice. Flavors include sweet potato-pecan, apple, cherry, blueberry, and pumpkin.

And though the bakery is not even officially open—that will happen April 15, with the grand opening planned for the beginning of May—JDR Delishery’s bagels have already won an award! The William Breman Jewish Heritage Museum gave JDR’s Caesar bagel its Great Bagel Award in the 2013 Battle of the Bagel. Other flavors include brie and fig, sea salt, chocolate, poppy, sesame, and everything. JDR also offers schpreads (a play on schmears) such as smoked fish, apricot, and honey butter. Its bagels, which are New York-style with the dough boiled first, are designed to be a bit smaller than those at Goldberg’s Bagel & Deli, since people are more health-conscious these days, Rothschild says. They can be purchased to go or ordered as sandwiches at Hilda’s.

JDR is roasting its own coffee using beans from Sweet Selma Farms in College Park. It serves cappuccinos, lattes, and more. Loose-leaf teas, including that made with locally grown mint, are also available. Next up for JDR, which is open from 8 a.m. to 9 p.m. during the week and 8 a.m. until 11 p.m. on weekends, are doughnuts. Rothschild’s business partner Sandy Houdeshell previously worked for Dunkin’ Donuts and will be using her experience to create a line of the sugary treats for JDR.

At the same time, Jake’s Ice Cream will begin focusing more on milkshakes and floats and promoting Joyscream, a nondairy treat made with almond milk, coconut, plantains and avocado. Rumor has it a Belgian waffle ice cream sandwich is in the works, too. 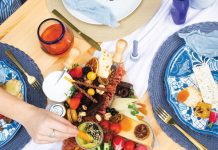 This Atlanta company can help you throw a picture-perfect picnic