Home Restaurants Charitable kitchens give back to the community

Last year, Atlanta’s restaurant community attracted national attention for the story of Ryan Hidinger and the Giving Kitchen. An up-and-coming chef with a popular supper club, Hidinger had dreams of opening his own restaurant when he was diagnosed with Stage IV gall bladder cancer. Local restaurants and chefs banded together to stage dinners and fundraisers for Ryan and his wife, Jen, who eventually started the Giving Kitchen, a nonprofit initiative to help restaurant workers in need. Ryan passed away in January, but his restaurant, Staplehouse, could be opening later this year.

The Giving Kitchen isn’t the only time when restaurants have given back to their community. Acts of kindness—both big and small—happen all the time. Here are a few of those moments.

Across the Street Market
Jessica Blinkhorn was just another regular at Inman Park’s Across the Street Market until owner Alison Wild discovered that the 35-year-old local artist was going to miss her own exhibit at the Rapid Pulse Festival in Chicago. Blinkhorn, who was born with spinal muscular atrophy, was not going to make the drive because her handicapped-accessible van needed repairs. That’s when Wild starting talking about Blinkhorn to her customers.

“The amazing part was how our regulars took over the project,” Wild says. “I did some hand-selling at the bar with a few people, and they were very generous, but even more than cash, it was their time and skills.”

Customer Bill Seitz made a list of Blinkhorn’s needs and costs, and another customer Dave Petty convinced a friend and car shop owner to fix the brakes, air conditioner, muffler, and alignment.

“Across the Street was named for the energy, the commitment, and the devotion to living a positive and participatory life doing what we love,” says Wild. “Jessica exemplifies that thought.”

Blinkhorn added, “I can not express the amount of gratitude felt at this moment. If it were not for Ali and Across the Street, my caregiver and I would not have been able to complete our trip to Chicago.”

Diesel Filling Station
When Katerina Marks was looking to host a fundraiser for the Charcot-Marie-Tooth Association, Diesel’s owner Justin Haynie offered to help. A regular at Diesel, Marks was born with Charcot-Marie-Tooth, a progressive peripheral neuropathy that results in muscle atrophy and sensory loss in the arms and legs.

Haynie ended up hosting a party during which Marks projected a slideshow about her cause. He also held a silent auction and a raffle, and donated $1 from every local draft beer or vodka drink sold. In the end, Diesel raised about $600.

“I was surprised with Justin’s generosity of letting us use the patio space [for the fundraiser]. For me, it really demonstrated his character,” Marks says. “All the money is being sent directly to the Charcot-Marie-Tooth Association because of the amazing strides they’re making in the cure for CMT.”

Murphy’s
Kudos to Murphy’s executive chef Ian Winslade, who recently convinced first graders at Morningside Elementary School to eat peas at nine in the morning. Last month, Winslade completed a series of cooking demonstrations at Morningside as part of its Schoolyard Sprouts program. Winslade taught the students about the produce growing in their garden and showed them how to make a saute of spring peas, tomatoes, and sorrel. The students participate in the planting and tending of the garden to learn about smart eating habits early on.

“In an age when so much food is processed, it is important to show children where real food comes from,” Winslade says. “These students are learning that good choices and good diets begin in their garden.”

MetroFresh
When the Grady High School chorus needed money for their spring trip to New York City, MetroFresh stepped in and raised nearly $2,500 by throwing a cabaret night. While students sang on the patio, owner and chef Mitchell Anderson hosted an auction and donated ten percent of the restaurant’s sales that night. Mitchell says he “straight up ask[ed] patrons to buy various items for the chorus, like microphones and risers.”

“I was an overachiever high school kid, who participated in many, many extra-curricular activities,” Mitchell says. “I know how important they are, and I also know they always need support. It just makes my staff and I happy to be part of their energy and to help when we can.” 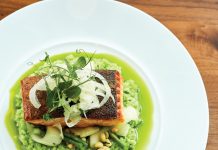 Review: Mission + Market lets a longtime Atlanta chef return to what he loves: seafood without fuss