Home Restaurants Checking in with Farm Burger’s Dan Latham
ATL Food Chatter: September 27, 2011
(To receive the Chatter and other culinary tidbits directly in your inbox, sign up for our weekly dining newsletter)

Dan Latham’s recent jump to the Farm Burger team left local observers somewhat mystified, since it was assumed—and hoped for—that the chef who once worked at New York’s Babbo and who ran a beloved restaurant, L & M’s Kitchen and Salumeria, in would ultimately open a brick and mortar version of his pizza truck, Moto Bene, in Atlanta. Instead, Latham, the James Beard Award nominated chef, now helms the kitchen at the new Farm Burger Buckhead and serves as corporate chef for the dynamic Athens based operation. Farm Burger—part of a collective that includes Athens-based Moonshine Meats and restaurant Farm 255—is co-owned by Jason Mann, a farmer whose goal is to create a more sustainable agricultural system in Georgia and beyond. Latham and Mann met last spring and hit it off; Latham helms the kitchen at Farm Burger’s newly opened second location in Buckhead.

Q: What prompted you to make the transition from pizza guy to hamburger guru?
DL: First off, “guru is a heavy term.” I’ve got about 10,000 more patties to make before I claim that status. Jason Mann and I were working together on a pork project and one day at a meeting it hit me that I wanted to be involved in Farm Burger. My hands are tied a bit in discussing the pizza business. I really felt like we had a good product and I spent a lot of time building the brand, but when it came down to growing the business, my partners and I just had different expectations from one another. Nothing more. I will say the mobile food world is very difficult, especially with a product as labor intensive as pizza. I hope to revitalize that product one day and see the vision through to a storefront, but for now I have to lay the pizza peel for the griddle.

Q: How do you compare the two businesses?
DL: The Farm Burger model is very similar to the Moto model, in the sense that hamburgers are a great platform for farm-direct produce. One case of arugula can top a lot of burgers, where as if were a fine dining restaurant it might last thirty minutes.

Q: What are your basic duties and responsibilities with the company?
DL: You know, I don’t like titles, but if I had to have one it would be Culinary Director or Company Chef. I am first charged with leading the Buckhead location through the opening and then working with Terry Koval in Decatur to standardize the recipe database, enhance the curing operation, and build upon the overall yumminess that is already in place.
Q: Will there be anything different at the Buckhead store in terms of menu?
DL: We are adding milk shakes (think bacon-peanut brittle as topping), but other than that we will run the same menu as in Decatur. I am pulling out some of my old salumi recipes and putting them back in action. Hint: I already have a batch of lardo under cure, and fresh sausages should be on the menu with in a couple of weeks. I have also had to dust off the baking and pasty skills as we are making our own chocolate and caramel sauce, brownies, and bacon-peanut brittle.
Q: Are there any plans for any local nonburger restaurants for the company?
DL: One day at a time.

NEWS AND NOTES:
Abattoir was voted as one of the recipients of the Diners’ Choice Awards for the top 50 restaurants that are “fit for foodies” by OpenTable.com. The list is based on over 12,000 diner reviews submitted to the site over the last year.

Old news by Internet standards at this point, but, for the record: Last Wednesday the contestants for Top Chef: Texas were announced and include two toques from Georgia: Briza chef Janine Falvo and Whitney Otawka of Greyfield Inn on Cumberland Island. The show premieres on Bravo November 2.

The Atlanta Business Chronicle reports that Hartsfield-Jackson International Airport is seeking a new round of proposals for food and beverage vendors at 126 locations throughout the airport. The new RFPs are available at the City of Atlanta’s web site.

Downtown. Thrillist’s eagle eye has uncovered the Sack Lunch Co., a small kiosk that sells $5 (tax included) lunch sandwiches (PB&J, roast beef), two sides (chips, yogurt) and a soda, plus a note from Mom, at 62 Broad Street, next to Rosa’s Pizza. Check out the campy lunch boxes for sale along with school supplies.

Midtown. The Midtown Patch notes that according, to an application to the City of Atlanta Bureau of Planning, a Mexican restaurant named La Hacienda plans to open at 900 Monroe Street, site of the former Silver Skillet.

What Now Atlanta reports that New York-based The One Group, opening STK and STKOUT at 12th & Midtown in late November, are also planning to open Cucina Asellina in the same building. It’s an offshoot of Manhattan’s Ristorante Asellina but featuring lighter Italian fare like pizzas, pasta and flatbreads soon after the opening of their steakhouse concepts.

Westside. Thrillist reports that The Porch at Collier, neighborhood bar and lounge with thekitchen helmed by Ryan Stewart (The Glenwood), will open at 1201 Collier Road on September 28.

Question of the Week: Who was the winner of the 5 Napkin Burger Build the Atlanta Burger Challenge?

PS . The answer to last week’s QOTW- What world-famous entrepreneur has been awarded the Life Time Achievement Award by the Georgia Restaurant Association? – is Ted Turner. (Carl named that one correctly in the comment’s section last week.) 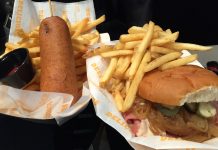 5 dishes to try at the new Mercedes-Benz Stadium 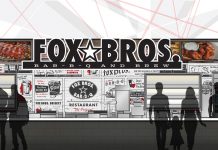