Forsterkase may be the most undeserving underdog of the cheese world: I’ve no idea why it’s not better known. An aged raw milk’s cow made in Switzerland’s Toggenburg valley, northeast of Zurich, it oozes when ripe and room temperature and it gives good funk without over-assaulting the senses. A spruce bark band encircles the cheese (an ancient technique used before plastic became the standard aging container), which is washed with brine as it matures. Of course the bark gives the cheese a bit of a woodsy character, but it also can taste beefy and pleasantly salty, and even a bit smoky and fruity. The cheese at the edge of the rind even takes on a piny sweetness.

Forsterkase is currently in stock at Star Provisions. 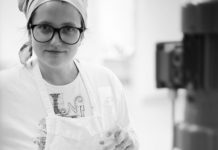 This is why Many Fold Farm is closing