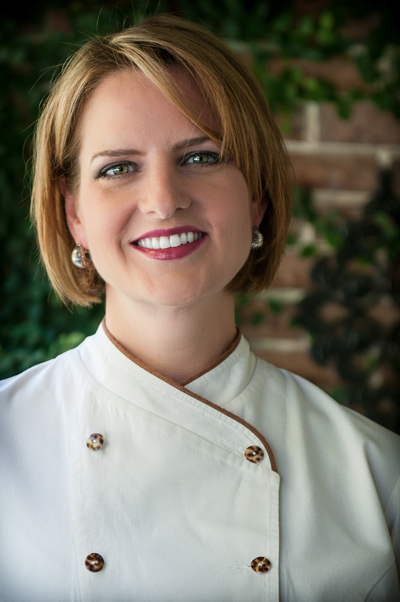 This is the first of an ongoing and occasional feature titled Chef Talk, where we talk to a chef about a memorable meal that influenced their career.

If you ask Carvel Gould to recall one important dish from her childhood, she might tell you about sitting at the table with her grandmother, picking meat from crabs. While the executive chef of Canoe is a seventh-generation Atlantan hailing from Buckhead, this culinary memory comes from the sandy beaches of South Carolina during the family’s annual summer vacation.

For as long as she can remember, Gould would fish for crabs on Fripp Island using chicken necks attached to the end of twine. A slight tug meant that a crab was eating the neck on the other end. She would slowly reel in the twine, and once the crab was close to shore, a relative would swoop in from behind and throw a net over the crab.

After hours of crabbing, the family would return home to boil the crabs. Once the crabs were finished and Gould had picked the meat with her grandmother, her grandmother would fold in onions, celery, and mayonnaise and season the mixture with salt and pepper. The crab would then be folded back into the shell and topped with crumbled Ritz Crackers and melted better. Into the oven they would go, and out of the oven aromas of buttery Ritz Crackers, boiled crab, and even the beach would fill the house.

Even with such culinary memories, Gould is, at first, unsure of what motivated her to become a chef in the first place. She remembers once believing that everyone could cook and often watched Julia Child and the short-lived television series Galloping Gourmet. I ask her about any fears in joining a field dominated by men. She doesn’t hesitate.

“I think that was a motivation, plus I like men. I like being around men,” she says. “I’ve always been that way. There’s no crying in cooking.”

At the time, her parents had a different kind of motivation and Gould’s mother asked Aria’s Gerry Klaskala, then the head chef at Buckhead Diner, to convince her daughter to change her mind. Gould visited Klaskala and after talking for an hour, he said, “I’ll put you on my line for three days, and you’ll never want to work in the kitchen again.”

“Am I working here?”

“Well, you’re on the GODDAMN schedule, aren’t you?”

That was 1991. Gould would remain at the Diner for two and a half years and eventually find herself working next to Klaskala again in 1995 on, at the time, an unnamed concept next to the river in Vinings. Canoe would become its name, and a decade later Gould would become its executive chef.

Gould now refers to Canoe as her child.

“My heart and my soul are in that restaurant. The general manager, the special events coordinator — we’ve all been there fifteen plus years,” she says. “…and that’s part of [Canoe’s] success. When you walk in, you understand that somebody really cares.”

As for those childhood crabs, Gould is “desperate to recreate that whole experience” but hasn’t had success. This is not to say that Gould doesn’t try. Once a year she joins a crew from Discovery Channel’s The Deadliest Catch in Dutch Harbor, Alaska to fish Alaskan king crabs, which she uses at the restaurant