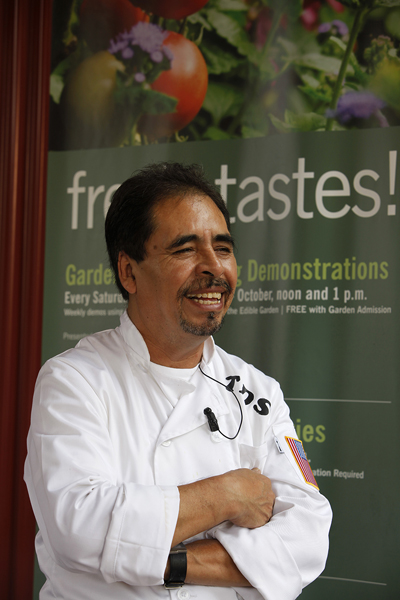 This is the latest installment of an ongoing and occasional feature titled Chef Talk, where we talk to a chef about a memorable meal that influenced their career.

Some people grow up hating vegetables. Chef Eddie Hernandez of Taqueria del Sol isn’t one of those people.

While the former drummer and aspiring rock star spent his teenage years trying to break into the music world, he also spent a lot of time in the kitchen with his grandmother. In his home kitchen in Monterey, Mexico, Hernandez had a particular love for two of his grandmother’s dishes: fried cauliflower and sautéed corn.

“Eating fresh vegetables, there’s no substitution for that,” Hernandez says. “When you eat it and the corn is sweet and clean, it’s just a good thing.”

Hernandez’s grandmother cooked the dishes whenever she found corn or cauliflower that she liked, but even so he wanted to learn the recipes so he didn’t have to rely on anyone. For the cauliflower, she would separate eggs, beat the whites, and then fold in the yolks to make an egg batter. She would then dip cauliflower florets into the batter before frying them. For the corn, she would sauté the kernels with onions and jalapeños or Serrano peppers before adding in queso panela, a white Mexican cheese made from pasteurized cows milk.

“I can just eat that by the pot,” Hernandez says.

Later on his grandmother, who owned restaurants and bars across town, would buy a field to plant her own corn and peppers.

Those years teenage Hernandez spent in the kitchen would serve as the culinary base for his career. With three half-brothers and three half-sisters, Hernandez was the only one with any culinary curiosity, and he soon became the house cook.

The position was not exactly complimentary.

“My brothers [think] like typical macho-Mexican guys where the kitchen belongs to the women,” Hernandez says. “If you’re a chef in Mexico, the first thing they think is that you’re gay.”

The criticism doesn’t seem to faze Hernandez. “They should see how many girls I’ve dated and see how gay I am,” he says.

Around 16-years-old, Hernandez moved to the United States in 1974 to Houston, Texas. After, self-admittedly, drinking too much, sleeping too little, and eating bad food, Hernandez gave up his rock star dreams and moved to Atlanta in 1989, where he eventually met Michael Klank, his current business partner at Taqueria del Sol.

Hernandez says he strives to adapt Mexican cuisine to American taste buds, as seen in his smoked pork tacos with bbq sauce and fried chicken tacos with lime-jalapeno mayonnaise. When it comes to authentic Mexican cuisine, which he says is “very healthy,” Hernandez believes events like the Field of Greens Festival provide the right environment and opportunity.

“You have to be in a scenario where people are open minded. There are a lot of things people won’t try in a restaurant but at some events they will.”

Currently, Hernandez is focused on franchising two to three Taqueria locations a year and expanding into Philadelphia, Raleigh, North Carolina, and Florida.

For those hoping to sample the corn that inspired the man behind one of Atlanta’s most in-demand restaurants, the chef often puts variants of it on the menu. A recent version combined leeks and blue cheese.

“It’s a takeoff on what my grandmother use to do,” he says.