It’s a Wednesday night in College Park, and, based on the energy level at a couple of recently opened restaurants, hump day is the new Friday. At the Real Milk & Honey, an all-day brunch spot from Chopped: Redemption–winning chef Sammy Davis, a standing room–only crowd is chowing down on Crown Royal peach cobbler French toast and Southern fried catfish with creamy grits. They snap selfies and shimmy to the sounds of a DJ. Next door, at Virgil’s Gullah Kitchen & Bar, a karaoke-night crooner holds his microphone out so customers can back him up on the chorus of Erykah Badu’s “Tyrone.” The whole room seems to sway.

If you’re looking for a relatively quiet dinner, you’ll need to pivot one door south, to Soul Crab ATL, the second restaurant from Greens & Gravy chef and social-media star Darius Williams. At Soul Crab, the real party starts on the weekend. That’s when diners can sing along to R&B tunes played by a DJ while sipping Kool-Aid cocktails and plunging into Williams’s seafood-with-soul dishes.

Welcome to College Park’s reborn restaurant row, where a trio of black-owned businesses has converted a once-quiet strip of Main Street into an Instagram-ready destination. The transformation has taken less than a year: Soul Crab opened in December 2018, followed by Virgil’s and the Real Milk & Honey over the summer.

The proprietors attribute their success to a perfect storm of real-estate availability, community enthusiasm, savvy social-media marketing, and a more-is-more attitude among patrons looking for multiple dining options in close proximity.

“There’s something to be said for the food-court model of business,” says Williams, who launched a second Soul Crab in his hometown of Chicago in August. “There’s something attractive about a cluster of restaurants being all in the same space.”

“All the people I saw cooking on TV did not represent who I was. That’s the core reason why I do a lot of what I do.”

After cultivating a robust social-media following around his soul-food cooking demos (with 317,000 Instagram followers and counting), Williams opened his first restaurant, Greens & Gravy, in 2017 in Westview—a neighborhood now home to another impressive cluster of black-owned restaurants. When Williams realized the Atlanta market was short on restaurants combining seafood and soul food—or crabs and collards, as he likes to say—he came up with the plan for Soul Crab. “My business model is to sort of be the underdog,” Williams says, “to serve a space where something wasn’t in existence.”

Today, Williams has 120 employees on the payroll, nearly all of them black. “When I was coming up, there was nothing for me to gravitate to or hold on to that looked like me,” says the 37-year-old, openly gay chef. “All the people I saw cooking on TV did not represent who I was. That’s the core reason why I do a lot of what I do.”

Gee and Juan Smalls, who debuted Virgil’s in June, say College Park has been supportive of their vision and lifestyle. The married business partners and first-time restaurant owners started out as event producers based in Midtown and rapidly became leaders in the black LGBTQ community. But when they decided to follow their dream of opening a restaurant-bar, they had no luck finding a property on their home turf.

“A lot of places that we did find said ‘no,’ ” Gee recalls. “I don’t know if it’s who we are or our lack of restaurant experience.”

Now, he believes the College Park address was meant to be.

“It just felt right,” Gee says, remembering his first look at the Main Street space formerly occupied by Duck Club Speakeasy. “We came in, loved how it felt, and really saw the vision for Virgil’s and fell in love with the neighborhood. I loved that it was thriving for black businesses.”

“My business model is to sort of be the underdog, to serve a space where something wasn’t in existence.”

It was Juan who suggested that Virgil’s pay tribute to his late father-in-law, Virgil F. Smalls, and the Gullah-Geechee cuisine Gee grew up with on James Island, just outside Charleston. As chef, Gee looks to the traditional Gullah-Geechee kitchen as inspiration for dishes such as red rice, crab rice, okra soup, and shrimp and crab gravy.

True to their background in the event-planning industry, the couple works hard to sustain a social atmosphere at Virgil’s. The restaurant has DJs on Fridays and Sundays and live music on Saturdays, when the bar stays open until 1 a.m.

While the Smallses are new to the restaurant business, the Real Milk & Honey’s Davis and his partner, Monique Rose, are old hands, with four Milk & Honeys in Maryland, Washington D.C., and Georgia.

Rose, a Milwaukee native and self-described “serial entrepreneur,” met Davis, the Chopped: Redemption star, at Scales 925, the now-shuttered restaurant of rapper T.I., in 2015. She was general manager; he was executive chef. During that time, they hosted a series of brunch pop-ups at Atlanta restaurants that were sitting empty on Sundays.

In 2016, they opened their first brick-and-mortar in Beltsville, Maryland, where they had found work as restaurant consultants. (The original Milk & Honey has since relocated to College Park, Maryland, and the couple has opened a second Maryland and a D.C. location). In 2017, they partnered with the old Epic Lounge on Cascade Road, where they had once held Sunday pop-ups, to open Atlanta’s first Milk & Honey; they have since parted ways with the owners.

Urged by fans to reestablish a presence in Atlanta, the partners found the perfect spot in College Park, where they rebranded as the Real Milk & Honey.

“It just felt good,” Rose says of the Main Street space. She dug the phenomenon of a restaurant row in the making, with Soul Crab already established and, at the time, Virgil’s about to open next door.

“And it was such an overwhelming response from people in the neighborhood,” Rose says. “Like, ‘We need something like this here.’ I think Milk & Honey was just the perfect addition to what they have going on.”

A valentine to Atlanta’s iconic black music scene, the interior features photos of music industry icons, gold accents, a bar embedded with vintage vinyl, and a menu not unlike that of its neighbors: crab hash; Southern fried fish and grits; lobster, egg, and cheese biscuits.

Davis and Rose already have their sights on a second Atlanta location—“on Cascade, if all goes well,” according to Rose. On the personal side, Davis proposed to Rose on January 1, but they haven’t had time to tie the knot. “If we can ever stop opening restaurants,” Rose says, “we can plan a wedding!” 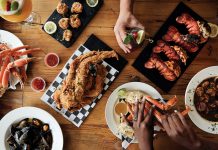 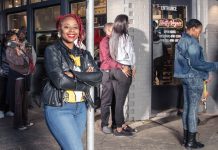