Hoping to bring Southern and ethnic flavors as well as a retro flair to the traditional corporate steakhouse, Cuts Steakhouse opened in Downtown Atlanta earlier this month.
Created by the owner of Truva, Muzo Saritas, Cuts is located in the space formerly home to the Turkish restaurant, on the lower level of 60 Andrew Young International Blvd NE. Rather than close to make room for Cuts, Truva has simply moved upstairs into an area previously used for private parties.

Though the restaurants are affiliated and share a kitchen, the similarities end there. Decorated in black, red, and white, Cuts is separated into several different areas. There’s an intimate dining room, a semi-private room that seats eighty to one hundred, and a sports bar with TVs displaying sports games. Cuts executive chef Donnie Wicker shares details on the restaurant and bar below.

What’s your background and how does it relate to the flavor of Cuts?
I just moved from North Carolina. I was executive chef at a European gastropub with a lot of Indian food called the Sly Fox Pub. I started my career in casual fine dining and have an ethnic background. I like Jamaican, Indian, and European cuisines. I also worked in a healthy gourmet sandwich shop in North Carolina. I like to explore with food.

Cuts is very retro. It’s geared toward Southern with different ethnic influences. We use plantains. We do braises. We want to keep it simple but give the customer some surprises.

How is the menu designed?
It’s very simple to read. We have steaks that people are familiar with, plus specials. Our menu is straightforward. There are the staples of steakhouses like wedge salad plus things you don’t see in traditional steakhouses, such as our goat cheese risotto fritter appetizer, which is more Italian. There’s a braised beef short rib with mushroom cabbage ragu appetizer, and a seared tuna ponzu vegetable stir-fry with wasabi leeks.

Most steakhouses focus on a la carte offerings. Does Cuts follow suit?
All of the steaks are grilled and served a la carte with a sauce. The sides are separate—like pimento mac n’ cheese and quinoa salad. We have a vegetable of the day such as Parmesan roasted Brussels sprouts. Toward the bottom of menu, we have special composed dishes like pecan-crusted salmon with quinoa and peach gastrique.

What do you offer for those who are looking for something a bit lighter or more approachable than a steak?
Our seafood offerings change daily. We have sandwiches: French dip with shaved roast beef and asiago cheese, seared salmon with remoulade, a lamb burger, and our Cuts burger with cheddar.

Is this a dinner-only establishment?
We’re planning to open for lunch Monday through Friday, starting on the 20th. We’re open for dinner seven days a week. For lunch we’ll have specials and soups, but I’m not done with the menu yet.

What kind of beverages does Cuts offer?
We have a full bar and are working on specialty drinks. I believe we’ll have fresh ingredients like raspberries and fresh fruit in the cocktails, in addition to traditional cocktails.
We’ll also have a bar menu. Thirty percent of Cuts is a like a sports bar with TVs for those who just want to grab a bite as they watch the game, and the rest is a steakhouse.

What’s on the bar menu?
Calamari, traditional wings, and we’ll have some more unique items, but they’re not ready yet. You can sit at the bar and order off the regular menu, but you can only get the bar menu at the bar.

What’s the parking situation there?
There are about four garages nearby, including one across the street from the restaurant, but the cost is on the diner. 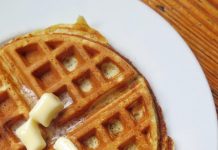 Where to go for Easter brunch in metro Atlanta