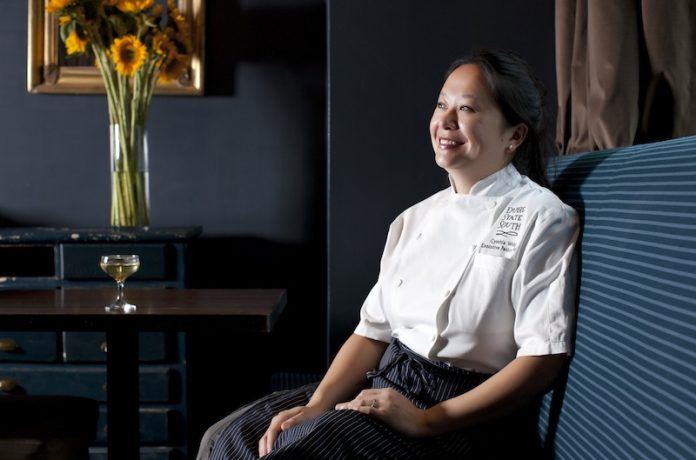 Last week during a casual working lunch at Empire State South, I mused aloud as to whether or not to indulge in a phatty cake for dessert. Wong’s phatty cake—a fluffy, sweet mascarpone filling sandwiched by two subtle gingerbread cookies—has had a place in Atlanta’s heart since she started making them at Cakes And Ale. Local diners followed her (and the phatty cakes) when she moved to the ESS kitchen about a year ago. During that lunch last week, the staff encouraged me to comply with my sweet tooth, as the phatties would be moving again—gone forever from Atlanta, probably—along with pastry chef and creator of the ginger-cookie-meets-mascarpone mash-up, Cynthia Wong.

Wong’s departure from ESS comes with impending motherhood—she’s a few weeks shy of her due date. But her scheduled departure for London in January of next year is an unexpected twist. “My husband got a job transfer of sorts. We were like, yeah, why not?” Wong said. “Let’s just go ahead and do everything really scary all at once.”

Fans of phatty cakes can attest—that subtle spice of ginger and fluffy, sweet mascarpone filling will change you. Executive chef Ryan Smith understands. He’s going to miss them, too, saying “She has rights to [her recipe] so that’s leaving with her. It’s been awesome having her here.”

Smith has promoted Melanie Durant to pastry chef, up from her role as assistant to Wong. Durant worked under Wong at Cakes and Ale, as well, taking over after Wong left.

“Melanie has been with Cynthia for a couple of years and she’s been here for a while,” Smith said. “Melanie’s bad ass so we’re excited about her stepping up.”

To provide patrons with an enjoyable, one-or-two bite dessert, the French canelé will make an appearance on the menu. With a caramelized crust and tender, almost custard-like center, the dessert will be different enough to signal a new direction.

Starting fresh is crucial for a chef finding their footing, according to Wong. “I really feel like it’s important for Melanie to have a totally clean slate for her to create whatever she wants and do whatever she wants at ESS. Let her have her own style.”

As excited as Wong is for the future, it sounds like she may miss Atlanta almost as much as we will miss her and beloved cookies. “I loved it at ESS,” Wong said. “If I wasn’t having a kid and leaving the country I would stay there until they wouldn’t have me anymore. Ryan is really talented. He’s generous and he’s kind and he’s funny. He treats everyone with dignity. Melanie is really creative—I’m excited for her. I think she’s going to get a lot of support and she’s going to do a lot of great things there.”

So for now, the book has closed on Atlanta’s love affair with the dessert that almost wasn’t. We owe it to Wong’s bread fascination for the genesis of the phatty. She was distracted in her bread baking one day and ruined a batch of ginger cookies meant for a friend’s brunch party. In an effort to salvage them and cover her mistake, she put together a mascarpone filling and “went from there.”

Here’s hoping they—and Wong—make their way back to us one day. Atlantans are always game for a good flashback. And besides, double-decker buses are overrated. Chef Hugh Acheson: “My real worry is for all the people that I promised to provide for and can’t”