Home Restaurants David Sweeney pops up at the Sound Table

Starting next week, former Bakery at Cakes & Ale chef David Sweeney will prepare a special bar menu downstairs at the Sound Table every Wednesday. The five-item menu focuses on Mediterranean, Eastern, and Arabic influences. With items such as Turkey Doner Yurum and Lamb Toasted Millet Kibbeh, it’s no wonder Sweeney is providing an abbreviated dictionary to explain his dishes.

“Growing up in Germany, my favorite go-to’s were always the Turkish, Persian, Greek, Syrian, Balkan grills—you name it,” he says. “It was my only soul food.”

Sweeney has known Sound Table partner and DJ Karl Injex and his team since “the early days on Edgewood.” The group used to dine at Dynamic Dish while their restaurant was being built out.

“We established a friendship as we discovered we shared common cultural philosophies,” Sweeney says. “Karl has always been a fan and supporter of my food and he reached out to me after I finished my Sunday nights at Octane last year. I currently have the time and interest to join forces with people I really like and admire.”

Sweeney’s menu will be available every Wednesday from January 29 through February 19. During that time, Injex will DJ and Sound Table bartender Navarro Carr will be pairing Sweeney’s dishes with drinks.

Sigara Böeği – filled phyllo pastry rolled into the shape of a cigar, then fried

Kibbeh – ground kosher lamb, seasoned and formed into the shape of a torpedo, considered the national dish of Lebanon, usually made with bulgur (but here with millet)

Millet – a gluten free grain with lots of B vitamin

Note: The January 29th event has been postponed to January 30th. 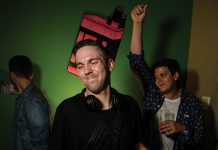