Home Local Foods Did you say ‘huitlacoche’? Gesundheit
All week long, I’ve been talkin’ smut with farmer Liz Porter. As co-owner of Buckeye Creek Farm in Hickory Flat and coordinator of the Cherokee Fresh Market, she seems respectable enough. But this week, every conversation we’ve had has been riddled with smut: where to find it, who might buy it, and why some folks can’t get enough.

Corn smut, of course. But Porter prefers to call it huitlacoche. Not only because it’s more fun to say than “smut,” but also because, if you can find the right chefs and consumers, it’s a heckuva lot more profitable.

“Last year, I couldn’t give it away,” says Porter, who noticed that the grotesque looking fungus, Ustilago maydis, had appeared in her sweet corn again this season after a big rain a couple of weeks ago. This year, though, is a different story. Porter expanded her marketing efforts to those in the know, and now she’s hoping that more of her corn will get infected.

In Mexico, and in certain circles in the United States, huitlacoche is a delicacy. The fungus, a distant relative of mushrooms, infects kernels of corn, causing them to swell with spores and turn a bluish gray. Imagine that first Aztec farmer who, upon discovering one morning that his corn had turned into a hideous freak show, thought of his hungry family and knew what would be on the dinner menu that night, no matter how nasty it looked. Now, huitlacoche—often translated on various Internet sites from the classical Nahuatl to mean some form of excrement—is served as a filling for tamales and quesadillas, as a flavoring for rice, and in soups.

“It’s nutty and earthy and rich,” says Lance Gummere, executive chef at The Shed at Glenwood, who first discovered huitlacoche—also known as cuitlacoche, Mexican truffle and maize mushroom—15 years ago while working in Shaun Doty’s kitchen at Mumbo Jumbo. “You just don’t forget that flavor once you taste it; it’s really good.”

Porter knew the value of her smut because a former farm manager, Nelson Astudillo, recognized it from his youth in Guerrero, Mexico. “He ate it, and I ate it,” she recalls. “It’s sort of an odd kind of flavor. It reminds me of a mushroom.” In past years, however, she had trouble finding any buyers. So when it reappeared this season, she put on her marketing cap and got the word out to everyone she could.

“We have huitlacoche!” she announced by e-mail to her regular contacts, including the chefs she supplies with produce. Gummere grabbed a dozen ears, which he intends to save for cooler weather to puree in a soup. Taqueria del Sol executive chef Eddie Hernandez picked up some too—and he hopes to get more from Porter and her farming neighbor Tim Stewart in time for the Field of Greens local food festival on Oct. 2. Hernandez plans to serve huitlacoche quesadillas. (He let me sample a preview; it was delicious. Subtle smoke and earth tones complement the corn.)

Porter is also selling the ears, as they present themselves, to individuals. If you’re interested in trying huitlacoche in one of these recipes, contact her at Buckeye Creek Farm.

At this rate, by next season Porter may not have enough smut to go around. 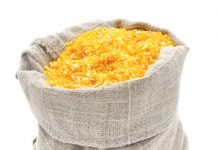 Four December dining events to check out in Atlanta 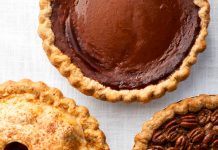 5 local foods for your holiday table