Home Local Foods Documentary honors Georgia’s young farmers
At the Georgia Organics conference last weekend in Savannah, I couldn’t help noticing that there were a lot of good-looking young people wandering around. Very casually dressed young people, with fit bodies and clear skin and a sparkle in their eyes. After watching the premiere of GROW!, Anthony-Masterson’s new film about the next generation of farmers in Georgia, I think I know why.

These young people are happy. Hard-working to be sure, but satisfied in their work, nourishing themselves and others, and the earth itself, with their unusual career choice to return to America’s agrarian roots—before corporations and chemicals took control of our food production.

“Real jobs are hard to come by these days, and I feel like this is the realest job of all,” says Arianne McGinnis in the film. Like many of the farmers depicted in GROW!, she came to her vocation with a college education and no land of her own. Still, McGinnis and her compatriots have found their own way, forging relationships with landowners or converting the family farm from conventional to sustainable practices.

“I guess any worthwhile job is going to have challenging components to it,” says another young farmer, William Hennessy. “People always tell you to do what you love. If you’re doing what you love, it doesn’t seem like work.”

The same might be said for the filmmakers themselves. Christine Anthony and Owen Masterson say they set out to turn Georgia’s farmers into “rock stars,” but within the tightly knit sustainable-food community, Anthony and Masterson are rock stars, too. That’s because in the past year, the two have devoted a considerable number of hours and personal dollars to create the film.

“It is such a beautiful story, the story of the young people doing this, striking out against the grain and going into business for themselves,” says Masterson, attempting to explain what inspired the husband-wife team to take time off from their lucrative commercial photography business to drive around the state filming sweaty kids. “Our interest is to grow more farmers.”

The couple moved to Atlanta from Los Angeles in 2005 and discovered a pressing problem: They were hungry. Specifically, they were hungry for the kind of healthy food that was easily acquired in their previous city. “To put it bluntly, ‘Who’s got organic arugula?’” Masterson jokes. They sniffed out metro Atlanta’s very few authentic farmers markets back then, got to know some of the farmers. They realized they could use their photography skills to help promote organic farming in the state.

They contacted Georgia Organics and offered their services. “It’s sort of been a love affair with farmers since we got here,” Anthony says.

Still photography led to some promotional and educational videos, and eventually to a 13-minute documentary called FARM! in 2008. Just two years later, the two saw that the sustainable food movement in Georgia had, well, grown. There were more farmers markets, more consumers. While there were indeed more sustainable farms, there was also a need for even more farmers—as well as patrons to offer their land or financial support to get the farmers started.

So they spent the good part of a year filming them, and transcribing interviews, and editing hours of video down to a 50-minute documentary with a 19-page script. And becoming even more enamored of those attractive young people with an appealing drive to do Work That Matters.

“We’ve developed really close relationships with a lot of them,” Masterson says. “We’re looking forward  to spring when we can go back out to the farmers markets and say hello again.”

The two say they admire the farmers’ “edginess,” which reminds them of their own pursuit of unconventional career paths. In the film, farmer Chris Jackson memorably says, “Every day we make decisions about what we want to do, what we think is important. And our boss’s boss’s boss is not telling our boss to tell us what to do, so that he doesn’t get fired by his boss. There’s none of that here.”

The next showing of GROW! is a fundraiser to enter it in film festivals around this country and in Europe. Parsley’s Catering and the Gardens at Kennesaw Mountain in Marietta will host the screening and a family-style dinner, 5-10 p.m. on Saturday, April 9. Tickets are $50 each, and can be purchased until April 4 through Georgia Organics’ online store. 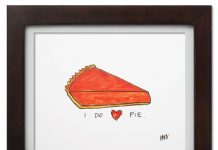 Products with Purpose: Make a difference when you purchase these local goods