Before you get all worked up about multicultural tacos not being real tacos, take a deep breath and consider the al pastor.

The al pastor taco’s citrus- and chili-marinated and vertical spit–roasted pork, which, with its ideal execution, achieves a near-caramelized glaze and crisp crust thanks to descending rivulets of sizzling fat, is considered the king of tacos. “If Mexico City had a flag, an al pastor taco would be its emblem,” says one of many emphatic everymen in the 2019 Netflix docuseries Taco Chronicles. “Al pastor tacos are like smog in Mexico City,” says another. “It’s part of our everyday life.”

It’s true that the al pastor taco came of age in Mexico City, but that wasn’t until the 1950s and 1960s; its culinary roots extend both to Puebla, Mexico and, more significantly, to the Middle East, specifically Lebanon. In the late 1800s, the first of what would be a wave of tens of thousands of Lebanese immigrants arrived in Mexico, mostly in search of better livelihoods. The Lebanese community that settled in Puebla in the 1930s brought with them the practice of roasting lamb and other meats (shawarma) on a vertical, rotating spit—and created a modified version, served on a pita-like tortilla, that Mexicans coined “tacos arabes.” Their Lebanese-Mexican descendants adapted the dish, subbing pork for lamb and introducing more traditionally Mexican spices and marinades. A few decades later, a further hybridized taco known as “al pastor” or “the shepherd” (a nod to its Middle Eastern originators) was popularized in Mexico City.

All of this is to say that tacos irrevocably belong to Mexico, but they are meant to be borrowed—and can be reinterpreted by other cultures to great effect. In fact, the tortilla might be the ideal place for cultures to collide. You have to admit that no other country’s iconic dish—pizza, sushi, pho, pierogi—lends itself nearly as well to such cross-pollination.

In setting out to find the Atlanta tacos that best merge myriad cultures, I expected some of the more successful ones to rely on Southern cooking traditions. Chef Eddie Hernandez of Taqueria del Sol is the rightful king of this mashup, and his fried chicken taco knows no equal among this town’s multicultural tacos. But there are also some great tacos here with Indian, Korean, Spanish, and New England influences. One of my favorites of the bunch brings together the cooking styles of not just one culinary heritage but two. Heirloom Market BBQ’s wood-smoked meats are pinnacles of a very particular form, and Heirloom would be exemplary if it had stuck to straight-ahead Southern barbecue. But its food is even better given the influence of co-owner Jiyeon Lee (who’s married to the restaurant’s Texas-raised pitmaster). She seamlessly melded ingredients from her native Korea into the menu, including a smoked pork that’s glazed with gochujang. It was a smart move to throw that pork, along with kimchi slaw, into a taco, combining the rough smoke of American barbecue with the intense umami of Korean cuisine within the fragrant comfort of the tortilla.

In America, we’re hesitant to recognize a crosscultural dish as being “American” rather than Korean-Southern or Indian-Texan. There’s a pervasive obligation to give credit where it’s due—and perhaps to over-label things. But who knows? Maybe in 60 years, when this magazine produces another account of the city’s finest tacos, one of our current hybrid offerings will no longer be considered a hybrid but a traditional taco. If the Lebanese-Mexican al pastor taco can be traditional, why can’t a Korean-Southern-Mexican taco? 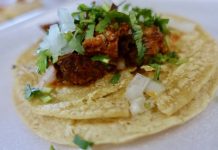 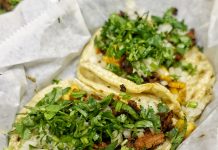