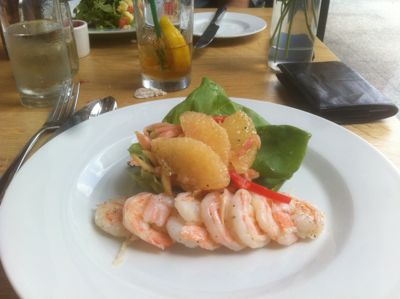 As I’ve mentioned previously in print, Downtown restaurants depress me on two levels. There’s little of quality for those of us who work here: BLT Steak can deliver a memorable meal but it’s a splurge; Alma Cocina makes me happiest as a destination for drinking and lighter bites like fried avocado taquitos; and occasionally I’ll meander down to Calypso Cafe for jerk chicken or goat curry. [UPDATE: As mentioned in the comments below, I’m also a fan of Paul Luna’s Bohemian charmer Lunacy Black Market.] Once a year, I’ll hit Ted’s Montana Grill for a salad and (one of my vices) chili cheese fries. That about concludes the extent of the area’s culinary appeal.

I get even more upset thinking about the tourists and conventioneers who come to Atlanta—who never stray from Downtown and depart thinking this is an accurate reflection of our dining scene. It isn’t.

But I always hold out hope, particularly when the hope is located in the building next door to the magazine’s offices. White Oak Kitchen & Cocktails opened about two months ago for dinner in a 17,000-square-foot space last occupied by All Star Cafe over a decade ago. I wanted to give the place plenty of time to settle in and work through any challenges. I was also waiting for the restaurant to begin lunch service, which started July 27.

Four of us went last week right around noon. The dining room is massive, with floor-to-ceiling windows and a handsome central bar full of brown liquor. A pile of scorched oak Jack Daniel’s barrels hints at the menu style: New American, in the guise of that quasi-Southern-with-a-whole-bunch-of-other-influences hodgepodge that is so endemic in Atlanta.

We started with a couple apps, skipping the ubiquitous pimento cheese and dolled-up deviled eggs for roasted cauliflower served with a hummus made from butter beans and goat cheese that had an odd sourness, and oysters Bienville with a grayish topping that needed a minute or so more under the broiler.

Two of us ordered salads as entrees, the other two asked for hot dishes, and we also decided to share a plate of the “caramel fried chicken” among us. About ten minutes after we’re finished with our starters, the two salads arrived. Our server told us the tuna burger and the steamed pork buns would be out in a moment.

A moment passed. Three minutes. Five minutes. Ten minutes. The mood unraveled at the table. It’s happened to most of us at one time: The conversation goes from “Hmmm, I wonder what could be taking so long?” to “This is f****g ridiculous.”

Our server had disappeared (the kitchen seemed half a football field away), so I politely approached the hostess stand and said, “Two out of four of us haven’t gotten our food yet and it’s been over ten minutes. Is there a manager I can talk to?”

“He’s in a meeting right now.”

“Yes. I’ll let him know when he’s finished, and I’ll go check on your order.”

Five minutes later, the two mains came out, and the fried chicken arrived in another two minutes. “Yeah, sorry—it was the chicken that held you up,” the server mumbled.

Most of the food was fine enough: the salad ingredients fresh, the tuna burger cooked a respectable medium-rare, the fried chicken standard and, mercifully, not doused in the sweet sauce. The steamed pork bun, though, was among the most memorably off-putting dishes I’ve had this year. Imagine a burrito left out in a summer shower. That was the texture of the wrapper: Thick, wet, and unappetizing, encasing dry, shredded braised pork.

It didn’t take us long to ask for the check. The server never asked if we enjoyed the rest of our meal, and the manager never appeared to explain the delay.

I’ll be back to try dinner in the next month. I can only hope it’s way better, and that we experienced an off-off shift for the restaurant, because this meal left an unusually acrid first impression. 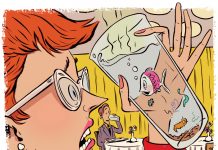