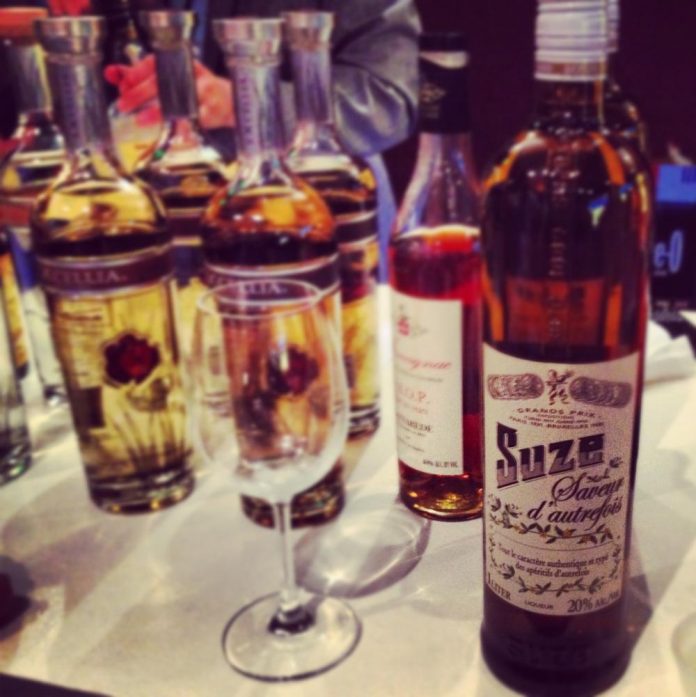 I dropped into Halpern’s Food, Wine, and Spirits show yesterday afternoon. It’s a distributor exhibition where farms, distilleries, importers, and so forth offer tastes in the hopes that a chef or sommelier might decide to order a case for their restaurant or package store. The general idea is that someone might have a taste of something delightful they wouldn’t have known about otherwise, which is exactly what happened to me.

Amidst all the oysters and pastured poultry and organic tequila that I sampled, the one that really stood out was Suze Sauveur d’Autrefois, a French bitter liqueur that just became available in Georgia about three weeks ago. It’s a striking taste, bracing and boozy like Campari but with the distinct flavor of Gentian root (which also gives it a deep green color).

As a rep from Prime Wine and Spirits (who distributes the liqueur in Georgia) explained to me, Suze was available in the States in that golden era of cocktails pre-prohibition and is finally now being reintroduced. Much like Lillet, the recipe for Suze in France has evolved over the years into something more sweet, less bitter, and less boozy than the original recipe. Interestingly, the Suze Sauveur d’Autrefois that’s now hitting the States is based on the original 1895 recipe, surely a nod to the pre-prohibition style that is dominating cocktail culture right now.

You might think to use it in a Negroni or a number of other cocktails, but the strong flavor is perfectly suited to a simple aperitif with a splash of soda, over ice. The Holeman and Finch Bottle Shop is carrying the 1 Liter bottle ($33), as well as a number of other package stores in town.