Few restaurants in Atlanta are older than The Colonnade. It first opened in 1927, and for 90 years the restaurant served southern staples like chicken livers and chicken fried steak. The restaurant is probably best known for its fried chicken, selling 2,000 pounds of poultry each week, but chef Ryan Cobb thinks the tomato aspic is what sets them apart. “It’s about as old-school as you can get, and I really don’t know anywhere else you can get it,” he says.

The dish’s origins date long before Cobb arrived. “There are people in the kitchen who have worked here for over 40 years. Many of them over 30,” he says. “They know the recipes and keep them the same.”

The dish—a spicy, molded jelly served with a dollop of mayonnaise—starts with tomato juice seasoned with a secret blend of spices, then mixed with finely diced onions, celery, and unflavored gelatin before being put into molds and chilled. Cobb estimates that the restaurant sells 300 to 400 orders every week. He confesses that he’s still not quite sure why the dish is so popular. “Prior to working here, I’d never done anything but fine dining,” he says. “I came here and thought, ‘What the heck is this? Tomato jelly?’”

And yet, it’s the most requested recipe in the restaurant. “We would absolutely not make it without the aspic on the menu,” he says. “We would be crucified by our customers.” 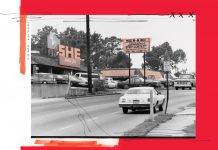 How long can we keep Cheshire Bridge weird?