When chef Todd Ginsberg set out to open The General Muir in 2013, he wanted to create a restaurant that paid homage to the delis that he and his parents grew up dining at. He planned to serve his childhood favorites, like matzoh ball soup, corned beef, and a pastrami sandwich, but there was one problem. “When I told my parents I was going to open a deli, my dad looked at me and said, ‘Todd, you don’t know how to make pastrami. How are you going to make a pastrami sandwich? What are you going to do?’” Ginsberg says.

Undeterred, Ginsberg started experimenting with recipes to get the perfect pastrami sandwich. He used a simple recipe that involved brining a brisket, rubbing it with coriander and pepper, smoking it, and steaming it, but it still wasn’t coming out quite right. “There was a lot of heartache in the first two months because we were still trying to dial in the right amount of brine.” Finally, after months of experimenting, he settled on 10-14 day brine. The sandwich, made with rye bread, a smear of mustard, and a heaping pile of pastrami, is one of The General Muir’s most popular offerings. Ginsberg orders roughly two tons of brisket every month just to keep up with the demand. He credits the sandwich’s popularity to the nostalgic flavors executed at a higher level. “We do everything from scratch, and it’s a reminder of what people ate when they were kids.”

Even though The General Muir has only been open for three years, it has become a vital part of the neighborhood. It has been consistently ranked as one of Atlanta’s best restaurants (it’s No. 16 on our list), and has even received national accolades. But despite the restaurant’s growing reputation, Ginsberg simply wants his restaurant to be a community hub. “We’re never going to be the best restaurant in the country or the fanciest, but we want it to resonate with people. My goal is to say I went to culinary school and learned how to cook better than my cooked mom for me,” he says. “But not my grandmother.” 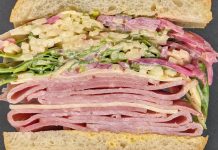