When chef Yiquan Gu opened Gu’s Bistro on Buford Highway in 2010, his tongue-numbing Szechuan flavors garnered city-wide acclaim. Tucked away in an empty strip mall (most are on Buford Highway), the restaurant was frequently packed during dinner. With plans to relocate, Gu decided not to renew the lease and closed in March 2015 (they’re still looking for that new location). In the meantime, the restaurant took their most popular dish to a stall in Krog Street Market, where they serve their trademark Zhong-Style Dumplings by the thousands.

Even though Gu’s Dumplings is only about 600-square feet, the kitchen sells more than 10,000 dumplings every week. Yvonne Gu Khan, chef Gu’s daughter and owner of Gu’s Dumplings, estimates that almost 80 percent of customers order them. Dumplings are common in Yvonne’s hometown of Chengdu, and her father’s recipe is largely traditional: thin flower dumpling wraps are filled with a mixture of ground pork, eggs, soy sauce, salt, and pepper. The real secret, Yvonne says, is in the sweet, spicy, and garlicky sauce that soaks into the dumplings. Chef Gu learned the recipe almost 30 years ago, from a friend of his mother. “He told my dad, ‘I can teach you how to make the sauce, but you can’t tell anybody about it,’” Yvonne says, adding that her dad had to clean the friend’s house and help with chores to prove himself.

They bottle and sell the sauce, but Gu refuses to share the exact recipe. “My dad comes early in the morning, 5 or 6 a.m. when the market is empty, and makes the sauce,” Yvonne says. “He doesn’t like to make it in front of people because people try to peek in and see what goes into it!” 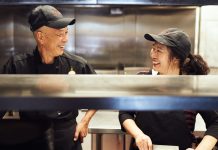 The story behind the Gu family’s Buford Highway comeback