Recently I’ve learned of two farmers markets that are on the ropes. I suspect there are others. It’s been a tough summer, with excessive rain washing out crops and scaring away shoppers. And then there’s that pesky supply-and-demand thing: Metro Atlanta’s 40 or 50 farmers markets compete not only for customers but also for vendors.

Committing to attend a certain market each week costs vendors precious time as well as product, so it has to be worth their while. They have lots of options, especially on Saturday mornings–so naturally, they commit to the markets where they can sell the most product.

Bottom line: If you think that the markets with the most vendors attract more customers, you’re only partly right. Farmers markets also count on loyal customers to attract more vendors. It’s a symbiotic relationship that often determines whether a small market will thrive or fail.

Organizers of Cherokee Fresh Market announced last week on the market’s Facebook page that this season will be its last. “After long consideration we have realized that we just don’t have enough community support to continue,” wrote market co-manager Liz Porter. The market, held at scenic Cagle’s Family Farm in Canton, has struggled since the death of founder and manager Bernese Cagle in June 2011. Friends and fellow farmers have shared management duties since, but the time involved, coupled with a dwindling number of regular customers, have taken their toll.

“Vendors’ interest ín the market has faded away because we didn’t have as many customers this year,” Porter says. But she says that the location, even though it’s a little off the beaten path, is ideal. “You can let your kids run around, and they have farm tours every other week. They’ve got bathrooms and the whole deal.”

This week, Porter posted again, imploring supporters to help keep it going. “The hard part is doing the weekly work of market management,” she wrote. “If several of you guys would join us and become part of the Cherokee Fresh Market management team it might be possible to save the market. There is no pay, just a good feeling knowing that you have done something to support bringing fresh, wholesome food to the community.” Porter is hopeful that as word gets out that the market’s survival is at risk, new vendors, customers, and volunteers will step up.

The future of Mableton Farmers Market is also unclear. Founded four years ago as a partnership between Cobb County Parks Recreation and Cultural Affairs Department, the We Can! In Cobb Coalition, Mableton Improvement Coalition, AARP of Georgia, and Atlanta Regional Commission’s Lifelong Communities initiative, the market’s initial grant is coming to a close at the end of this season. Now it needs new leaders–and willpower. “If it’s going to survive, someone has to take ownership of it and decide to keep it going,” says Marcia Berlin, who this summer assumed oversight of the market on behalf of the Atlanta Regional Commission.

Mableton Farmers Market also needs new customers. Berlin says patronage has held steady at about 150 shoppers per week–enough to keep three growers and a few other loyal vendors coming back, but not enough to support more businesses. Though the market originally targeted older shoppers, Berlin has focused efforts this year on attracting young families each Thursday morning with activities and special treats for kids. Tomorrow, for instance, the market is holding hourly Hula Hoop contests.

“We just need to be bigger and better and get more vendors and more customers of all ages,” Berlin says. “We’re having meetings right now, trying to figure out how to keep it going.”

A third market, West End Farmers and Artisans Market, has never even gotten off the ground this year. Operating on a first-and-third Sunday afternoon schedule, it has been rained out every time, says market manager Raishlyn Grant. With no rain in the forecast for this Sunday, the market will finally open for the season. In addition to three scheduled produce vendors and several artisans, the market will hold cooking demonstrations by two chefs as well as tours of its host site at the Wren’s Nest, the museum home of “Uncle Remus” author Joel Chandler Harris.

If you love the idea of local food, then get out this week, next week and every week you can–rain or shine–and support your local farmers market. Even if it only has one farmer. If you come, the number of vendors will build. 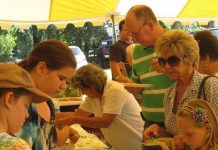