Home Restaurants Final Fork: Choose between the Iberian Pig and Holeman and Finch 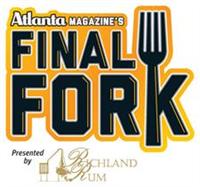 It’s time for the sixth and final round of our Final Fork contest, which brings us one step closer to our readers determining Atlanta’s favorite restaurant. And the final two are:
Holeman and Finch Public House
The Iberian Pig

Hmm, I think I can pick up on at least one theme: pork. Both these restaurants built their menus (and cult appeal) around the pig. We get the appeal. Chefs do, too. In our Southern issue this past November, we showcased eight local culinary mainstays with pig tattoos. (We also had a nice essay on the appeal of pork’s cousin, country ham.)

At this point, it’s probably pointless for me to pontificate about the restaurants to try to steer you towards my picks, so here are some basic facts about each restaurant:

Holeman and Finch Public House
– Known for producing some of the best cocktails in the city
– Sells that famous burger after 10 p.m. on weekdays and at Sunday brunch
– Started for industry insiders looking for food after their shift, the restaurant still serves until 1:30 a.m. on Friday and Saturday
– Sister restaurant to the more high-end Restaurant Eugene across the porte-cochere
– Run by partner-bartenders Greg Best, Andy Minchow, and Reagan Smith—along with Eugene’s Linton and Gina Hopkins

The Iberian Pig
– An always-hopping restaurant with a prime location on Decatur Square
– Noteworthy items include jamón Ibérico (Spanish ham), cocas (crackly pizzalike constructs), and an excellent burger of their own
– Signature cocktails include their eponymous take on an Old-Fashioned, featuring bacon rye and maple syrup
– Run by the Castellucci family, the same team behind Sugo and Double Zero Napoletana
– Rumor has it that the Iberian Pig will in some way soon be teaming with the crew behind Steady Hand Pour House, which recently lost its Emory Village space

What do you think? Cast your vote for the Iberian Pig or Holeman and Finch before Thursday at 11, and be entered to win one of our sweet prizes, including a Big Green Egg, a bottle of Richland Rum, and a $100 gift certificate to the Final Fork restaurant of your choice. Remember: Each round you enter gives you yet another chance to win. Learn more about the prizes here.